R.B.I. Baseball is not in fact a Tengen game, but rather a re-skin of a Namco game named Family Stadium, whose sequel shares an almost identical engine. On the other hand, R.B.I. Baseball's sequels, R.B.I. Baseball 2 and R.B.I. Baseball 3, don't use original engines from Tengen, but rather they share most of the engine code from this game. The recycling went a little too far! Still, this remains among the best of baseball games on the NES. 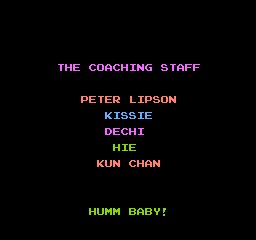 Only appears in the US version. At the title screen, hold A or B or both then press Start. A staff screen will appear. 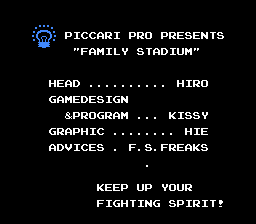 Available only in the Japanese version. Play exactly 10 games, no matter if you win or lose. It can even be the games played in "WATCH" mode by the computer itself. After the 10th game is over and the game returns to the title screen, a credits screen will appear before the team names demonstration. 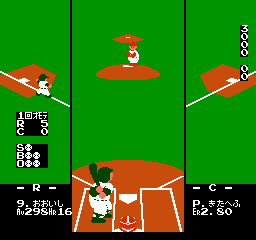 Both regional versions have this cheat. You can enable it in the Japanese version with the button code or with the Game Genie code in the US version.

In the Japanese version, any time during the game, hold Up + Down on Controller 1, then press Right, Left, Down, Up on Controller 2. In the US version, just use the Game Genie code XVUVNGAV.

A set of numbers will appear at the top-right corner of the screen. The upper four represents the address, and the bottom two are data values at the selected address. Press B (for the Japanese version) or hold Down and press A (for the US version) on Controller 2 to enable address and data edit : change any digit using the D-Pad buttons on Controller 2, or press the previous combination to save your changes. You can watch any ROM or RAM data and change any RAM data.

There are a series of Namco games, made by the same programmers Haruhisa Udagawa and Kumi Hanaoka, that contain the same self-tests for data integrity (Babel no Tou, Dragon Buster, Family Jockey, Lupin Sansei: Pandora no Isan, Mappy-Land, Sanma no Meitantei, Sky Kid, Super Xevious: Gump no Nazo, Valkyrie no Bouken: Toki no Kagi Densetsu). Only the Japanese version of this game contains such tests.

To enable any of these tests, you need a special device plugged into the expansion port. The operation of the device is very simple: it should accept the data bit from the data input port and return it inverted to the output data port. The device consists of a 4-bit shift register, working as some sort of FIFO buffer. The input bits goes to the input and then shifted to the output after four cycles.

At the game's boot, it tries to send some special data to the device. If the data output doesn't match the data input inverted, then the game continues the normal operation. But if all data (usually 32, rarely 64 bytes) matches, self-tests will be performed. The program calculates 24-bit partial checksums for the PRG (excluding the last 8K) and the CHR data, summing only every 15th byte, and comparing it against the etalon.

Before testing of the PRG data, the background color turns red; before testing the CHR data, it turns green. If any of these tests fail, the program will jump directly to the reset routine. It means one of these tests will be performed infinitely until the special device is unplugged or until the test is passed.

Game Genie code GAVYNTEI will skip the tests for the special device's presence and jump straight to the integrity tests.