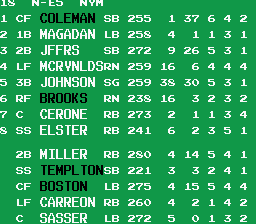 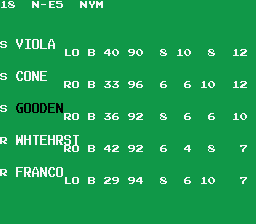 Each version of the game features a different league (Major League Baseball, though only with a players' association license, and Japan's Nippon Professional Baseball, respectively), so a myriad of regional differences are present.

Super Famista features the Namco logo on boot-up, which was removed from Super Batter Up.

The title screen was changed completely, right down to the copyright. The Japanese version uses the scoreboard design of Chiba Marine Stadium; Super Batter Up opts for the center field scoreboard of Wrigley Field.

The background and icon graphics were changed, as were the names of the options. Additionally, the watch option in Super Famista became a league play option in Super Batter Up.

The background and team icon graphics were changed, and Super Batter Up has 26 selectable teams to Super Famista's 14.

Super Famista has the count on the right side of the screen and the score on the left. This was reversed in Super Batter Up. Additionally, the count is displayed as dots in the Japanese version and numerically in the US one. The player graphics also differ between the two.

The home run cutscene features two blimps in Super Famista, whereas Super Batter Up has the fun sight of Pac-Man either on a rocket or in a plane. The player graphics also differ between the two.