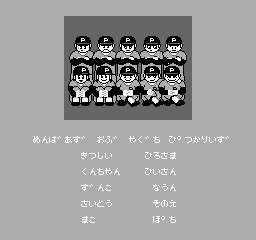 At the title screen, hold A + B and press Start. A staff screen will appear.

The text translates to:

Kissie is Yoshihiro Kishimoto, Zunko is Junko Ozawa, and Hirosama is Hiromu Nagashima. "Piccari Games" was a developer alias used by Namco in some of their games (mainly the Family Stadium games). When localized to English, the staff role is "Members of Piccari Yaguchi's", but the game adds "ず" (Zu = 's) to the end of "Piccari" (ぴっかりい) because in Japan, they say their first name last, and their last name first. Furthermore, the game also fails to use the lower-case version of Tsu (っ, used as an accent such as 'BaTTleship or aPPle) and instead uses the upper-case version (つ) which can make it look like it translates to "Pitsukarii".

The following text appears in the ROM at 18010.