Rage Racer introduces original car manufacturers, multiple Grand Prix system, cars that must be driven with manual transmission (this mechanic was later dropped), a money system (dropped until the seventh game), car customization, and the series' fan-favorite hottie Reiko Nagase to the Ridge Racer series. That's a list of innovations.

Oh, and it has ads for Advan/Yokohama tires plastered almost everywhere, the only real-life sponsor to appear in the series except for Namco themselves (until the Japan-exclusive DoCoMo livery for Kamata SYNCi in the widely-reviled Ridge Racer for PlayStation Vita). 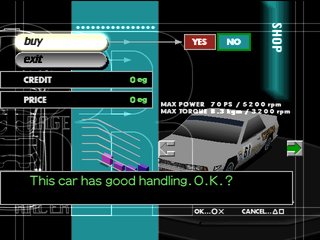 Setting 1E4C69 to 0100 (US version, regular Grand Prix) will remove the Gnade Esperanza, the starting car, from the garage and add it to the car shop, revealing its low, low price of 0 eg and that it is described as having a good handling (same description as used in Age cars). Note that this code must be used when the Esperanza is at Class 1 specification.

Of note, the Esperanza is placed the same way in the shop as in the garage: between Age Erriso and Lizard Acceron, the two Class 2 cars.

By starting a Class 1 race at The Extreme Oval (a track not unlocked until Class 3), you can race in the prologue sequence.

Some car names (in Class 2 and Class 6, the hidden class after winning all Extra GP races) are changed outside Japan:

The text "Rage Racer..." and a paragraph after it were cut from the prologue sequence in the international versions of the game. Additionally, the Japanese version also features a voice-over.