Remember 11: The Age of Infinity (Windows)

Remember 11 is the third entry in the Infinity series, meaning you should expect a lot of mindscrew. In fact, you may be here to figure out some of the unsolved mysteries.

The scenario is as follows: Fuyukawa Kokoro survives a plane crash with four others. They take shelter in a cabin, cut off from the world by a blizzard and poor communication lines. Elsewhere, Yukidoh Satoru falls from the clock tower in SPHIA, a facility that deals with mentally unsound patients. He awakens with some memory loss and realizes someone is trying to kill him.

Shortly after, Kokoro and Satoru realize that they are somehow exchanging bodies and one of the characters somehow appears at both of their locations...

This sprite probably served as a placeholder during development. The sprite depicts Minami Tsubame from Memories Off 2nd, another title developed by KID in 2001. The text reads as follows:

Although Sayaka appears in the prologue, only one or two sprites are used. Around 7 sprites go unused which are shown below.

Given the file naming convention, this is costume "C". That means there were two other costumes, "A" and "B", which were drafted at some point but not included in the game. Most likely, costume "A" would be Sayaka in normal clothing and costume "B" would be her wearing a coat.

Hotori was originally meant to be the trickster archetype, but it didn't end up working so she was given a minor role[1]. Below we see her with costume "A" which is normal clothing, but no costume "B" version exists which has a coat on.

One of these sprites can briefly be seen in the ending movie on Satoru's epilogue.

EV_CO29B is a dummy used to represent an alternate version of EV_CO29A (shown above).

The character depicted in EV_CO29B is Hizuki Ayaka from Memories Off, another KID game. The text saysː

Again we see Hizuki Ayaka from Memories Off. The text reads: 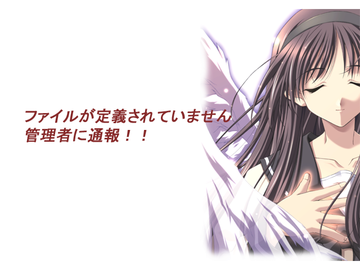 The background from the prologue is never seen in the daytime, but the file exists within the game. 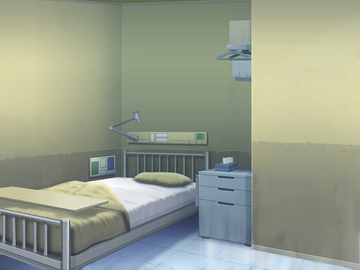 In fact, nearly all backgrounds have five modes:

Not all backgrounds are seen with all these modes in the main game. This is common in visual novels where a bright version of the CG is made first, then many derivatives are made from it. 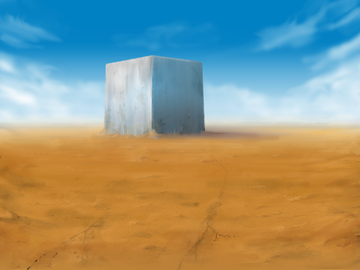 Despite not being shown in-game, the third area (Hotarubi Mine) does in fact have a background. It was not used because the time of day is incorrect as it should be dark just before dawn. The PSP version uses a corrected night-time version of this background.

The following are still images of the fractal that is used in the transition videos. It's possible they were supposed to be used as background when the protagonist thinks about something for a while, but were later scrapped for being distracting.

The following images show the Borromean rings which are featured in the game logo. The images show how if you remove even a single ring, the whole thing collapses and none of them are linked anymore. This is likely used to explain the "trinity" involving Kokoro and Satoru.

Within the game files, they appear after Satoru nearly drowns but before Enomoto explains the space-time transfer phenomenon. 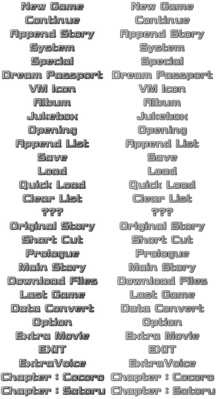 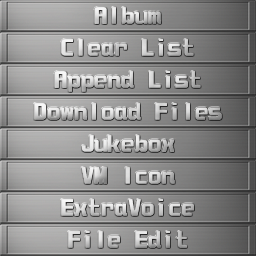 Many of these items are not used, and can be grouped as follow:

Dream Passport was a feature on the Japanese Sega Dreamcast which allowed users to perform basic internet functions such as browsing or checking email. Remember 11 was never released for Dreamcast, but was released on its competitor, the PlayStation 2. "Download Files" may have been used to download save files, software updates or additional content. "VM Icon" may stand for "VoiceMail Icon" (see Unused Sounds) or the icon that is displayed on the Visual Memory Units for the Dreamcast.

This menu comes from the earlier PlayStation 2 version of the game. 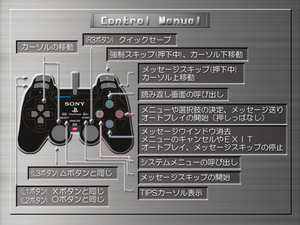 These are the map names from Ever17. 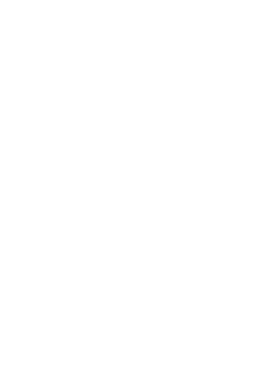 A "desktop accessory" program was released August 20th 2004, 5 months after the original release of Remember 11. The program contains screensavers, wallpapers and uses character sounds to alert you about new mail, the current time, and drop quotes from the game. Parts of that program are found in the PC release.

Each character's final voice clip is about a minute long and contains a character monologue. It seems the voice actors talking about the game and their role in it as they're a lot freer and more carefree in their delivery.

The following sounds also seem to be related to an unused desktop buddy program.

The following sounds seem to be "system sounds". While some are used for sound check, many of them seem to be unused.

This file contains reference to a third story route, the "SELF route" (Accessible in one of the debug menus). This doesn't exist in the final game, but it seems it was planned at some point.