SOUND VOLTEX BOOTH is the first game of the SOUND VOLTEX series, and was a radical departure in terms of song variety compared to Konami's other rhythm game titles. Rather than relying on their internal sound team for most of the music (at least initially), most of the music was contributed by the community through a series of contests, often with a theme attached.

The game has a ton of graphics leftover from early development, which show a very different game than the one we got.

A few of the game's files include graphics of a very early interface, showing an almost completely different control scheme. Rather than the two knobs and six buttons of the final release, there would have been eight knobs, two buttons, two cross-faders, and a turntable. The notes also scroll from the side in this version, rather than the vertical "hallway" scrolling used in the final release. Each control also gets its own lane, while the final release has the knobs, main (white) buttons and FX (black) buttons all laid atop one another.

Presumably, the original idea for the game would have been to make a DJ simulator like the beatmania series. This is further supported by the "BOOTH" part of the title (as in a DJ booth), and the crowd in the background. Interestingly, SOUND VOLTEX VIVID WAVE, the fifth game in the series, would re-explore this idea by adding a game mode where you pick three to four songs to be mixed together, then play the resulting mashup. 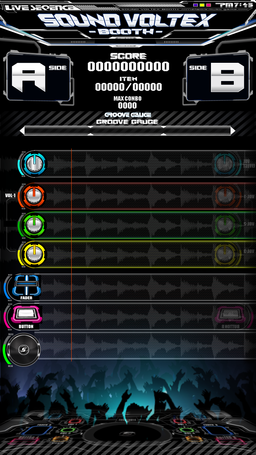 Included with the gameplay mockup mentioned above is a logo labelled "dj_logo01". It's unclear what this would have been used for, as the mockup shows that the game's logo was mostly finalized by this point. Interestingly, while the image data says "SOUND VOLTEX", the alpha channel says "POP'N MUSIC", one of SOUND VOLTEX's sister franchises. It's possible this was just used as a placeholder before the SOUND VOLTEX name was decided upon.

One song, memories by きくお (Kikuo) with vocals by Hatsune Miku, can be found in the game data unused. The song itself is a remix of a song from beatmania IIDX 8th style of the same name, done by in-house regular TAKA. Only sound data exists for this song, there are no charts or artwork associated with it, and it's missing from the game's music database. Had it been included, its internal identifier would have been "1r0022_memories_kikuo" with a song ID of 38.