A follow-up/spin-off to the original Sid Meier's Civilization, Sid Meier's Colonization is the thrilling prequel to Thanksgiving. 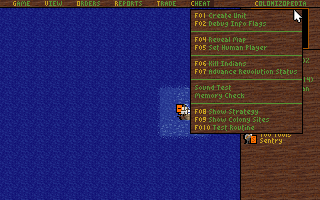 Microprose re-enabled their debug cheats menu in the Version 3.0 patch in response to customer requests, with a stern warning included in the readme that "These cheat functions are brute-force development tools which have not been polished for public consumption. Use these tools at your own risk."

While holding down the Alt key, type in "WIN" on the keyboard. This will put a very useful cheat menu on the top menu bar.

The following commands are also enabled when on the Colony screen:

As well as these keys on the Europe screen:

Running opening.exe with the following arguments will print debugging material.

DEBUG.TXT primarily handles the text for the Cheat Menu, but there's a couple of unused lines in here:

Message of the Day

...while the other scolds testers for locking files on the network!

This was a free patch released by Microprose post-release.