Use your might to smite or neural delight to alight. It's fight or flight, the video game.

The three provided customizable "extra" units from the PC version are present in the unit images. They can be created with a GameShark and operate normally.

There are also two other unused items among the units:

And whatever this is 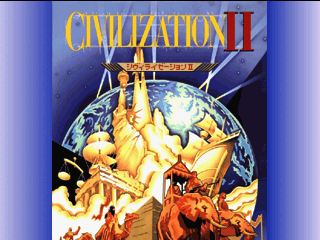 \others\title.tim contains this apparent alternative title screen. It's seen on the front cover of the Japanese strategy guide, but not in-game.

Tiles for various styles of small display windows and alternate game setup screens are present amongst the other game icons. They're loaded at the main game screen but are never used (except for the line of tiles under the "Tribe" bar).

The intro text for the "Rise of Rome" and "World War II" scenarios from the PC version are present in \CIV2\rome.txt and \CIV2\wwii.txt files, respectively. As the PlayStation version doesn't have scenarios, these go unused.

The PAL version includes Civilopedia text for a Plumber advance. As this advance is dummied out, the text is never shown in that context. The description is identical to that of the Sanitation advance, so it is accessible in that sense.

A directory listing for the Japanese CD's \Civ2\ directory exists in all versions in the \Civ2\textlist file.

The US release has nine unused WAV files in the root of its filesystem. They are 10 second-ish samples of music from the PC version's Redbook audio, with the final seconds being the intro to the next audio clip in the sequence.

The PAL release removes these files and adds Empty.da, a 3:02 wav file of complete silence.

The Japanese version features busier map backgrounds to choose from, and the main UI panels have both a top and a bottom as opposed to the other versions where they only have sides.

The game text was edited for the PAL version to include contractions and remove some unnecessary verbiage. Some dialog was also made wider.

PAL alternatives (the 'Letss' is a typo resulting from the editing):