Small Soldiers is a platformer based on the movie of the same name.

Two songs are only heard through the music test. Both are enhanced when the game is played using a Super Game Boy, suggesting that they were removed at the last minute.

This song was likely the boss battle with Chip, and is song 5 in the music test.

The other unused song that can be accessed in the music test using the GameShark code 01070EDD may have served for the ending sequence. Game Boy Game Genie code 073-2A9-F72 will enable song 07 to be selectable in the sound test.

Three placeholder screens were likely going to be used as in-game cutscenes, but the first one was probably not since it had the word "kill" in it. A title screen placeholder exists as well; all complete with Super Game Boy palettes. Access the unused screens via Game Genie code ??4-09F-E6A. 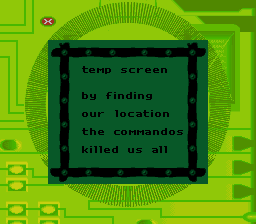 Could have been intended for when your location was discovered by the Commandos. ID: 18 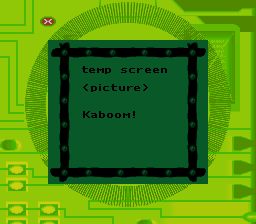 May have been intended for when Chip is electrocuted then explodes during the chase battle. ID: 20 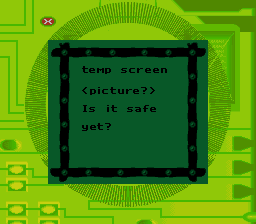 Found at 0x4344 is some text that may have been for an early cutscene or Characters introductions. Note, the last intro is unfinished.

Misc texts may be found in the next text block at 0x46E3:

There are some unused level room names in this game, most of them are placeholders though: At 0x45B4: 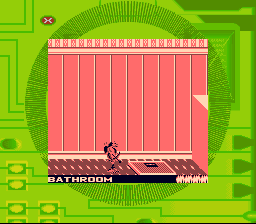 Entering the Game Boy Game Genie code 090-C2A-E6A or modifying the ROM address 0x50C2 to 09 will start you off in an almost finished Bathroom level. Music from the Dumpster area is played and a custom palette setting is shown. Three enemies will shoot at you, there is a sink with frozen water and a toilet that you can walk on. Accessing the upper-leftmost area is impossible since you cannot jump far enough with a running leap. Exiting from either the left side or from the incomplete collision from the far left will lead you out into the Upper Hallway where the door is closed. Oddly, pressing up at the doorway entrance will display the word ENGAGED. The level name can be found with the other level names at 0x45F7.