From The Cutting Room Floor
Jump to navigation Jump to search
This page is a translated version of the page Solitaire (Windows, 1990) and the translation is 22% complete.
Other languages:
English • ‎polski • ‎português do Brasil • ‎日本語 • ‎한국어

A window in the game executable which allows you to type in a game number, like FreeCell...except Solitaire doesn't use game numbers in the retail version. 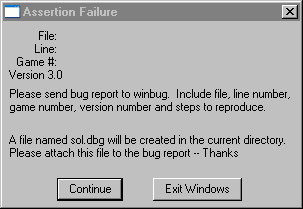 Also hidden in the game executable, but never appears. As above, it asks for the game number to be included with bug reports, which don't exist in the retail.

This message, which has been confirmed to be in the Win3.x, Win95/98/ME and XP versions, suggests that there was (or is) an option that allowed you to use a custom bitmap for the background image of the Solitaire window. It is unknown if there is a way to use or re-enable this feature.

These are leftover options from the debug menu. "Force a win" has a key combination assigned to it in the final game (Alt + Shift + 2), so you can still use it. However, you can re-add the other two to the menu, too. The first one does nothing, and the functionality of the second one has mostly been removed in the retail, so it just seems to freeze the game.

Interestingly, the first option is called "Hell, I don't know" in NT4, both in the debug and retail versions.

This string is left over from debugging, and not used in the retail game.

A set of options that are never used. Their purpose is unknown, but probably linked to the above-mentioned ability to set a bitmap as the background.

This special debug version was taken from the checked (aka "debug") version of NT4.

The debug menu is "hidden" between the Game and Help dropdown menus, just click there to reveal it.