Space Harrier is a game about a hirsute young man's mission to fly across the globe and eradicate the local flora and fauna.

Starting at 0x00454 in the main CPU is this text that may have been used in debugging. 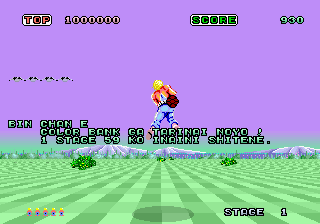 If RAM address 126100 -- the palette index used for enemy objects -- is set to a value higher than 3B, this message will appear.

Bin(-chan) is Satoshi Mifune, one of the game's programmers and a frequent collaborator with Yu Suzuki (it is assumed Suzuki left this message). A similar message appears in OutRun.

An older logo for the game can be found at the back-end of the game's tiles ROM. Replaced with the fancier, rotatier logo. A logo using the same font can be seen in the flyer for the game and on the arcade cabinet.


The Space Harrier sprite format was reverse engineered by Jens Lippmann, and in amongst the familiar sprites there are others which seem partially completed or abandoned. Remnants of the drawing process can still be seen in all sprites, where one color in every palette is often used for what look like vertical guide or measurement lines every 8 pixels.

Unused dragon sprite. There are no other palettes for this dragon, unlike the others which change from green through red to show damage.

Unused dragon sprites with various palettes. With the fur and friendly appearance, this looks to be a companion to Uriah the bonus stage dragon.

Unused boss sprites. These look very similar to Syura and may have been intended for animation. Different palettes allow the red to fade to black.

Unused man and gun sprites. The gun has different palettes to fade the red to black.

Unused sphere sprite which could have been used to model the Tomos (right).

Has various palettes and a version of nearly Tomos size. 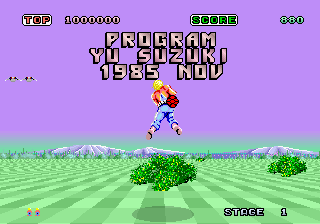 There's an Easter egg which displays a credit from Yu Suzuki, as well as the game's build date.

To trigger this text, at the start of a stage (before the stage name disappears), press Shot-3 six times, Start eight times, then Shot-3 again. Note that any misstep in this sequence will reset the whole process.