The PlayStation version of Sports Car GT, less received compared to the Windows version, was basically an unofficial game of the 1998 season of the IMSA GT Championship (today the IMSA WeatherTech SportsCar Championship), minus the Can-Am prototypes, and with the Le Mans-spec works Porsche 911 GT1 sneaking in. 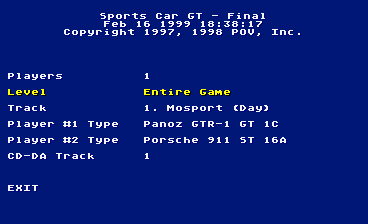 Use the following code when the game starts to display a debug menu. According to the top text, there is a two year gap between the Milestone 2 prototype (which was a huge debug menu) and the final game.

Amongst car types, variations of the Mazda RX-7 and Nissan 240SX is mentioned; using any of them gives you the #17 Sport Touring BMW M3 (GTQ class), except for the "Team #2" variant of the RX-7, which gives you a purple Sport Touring Saleen Mustang instead. Both the 240SX and RX-7 did have history in competing in IMSA-sanctioned competition, but these cars were in the GTO/GTU era of early 90s, whereas the cars featured in the game are based on the then-current GT1 era of sportscar racing, although both cars did actually compete in 1998 (Team Ecuador entered an 240SX in the GT3 class and there were two privately entered, different specification RX-7s that season, one in GT2 class and other in GT3 class).