This is a sub-page of Star Fox Adventures.

Dinosaur Planet is what essentially became Star Fox Adventures. There are a surprising number of leftovers from this earlier incarnation. As the plot was heavily rewritten for the final game, there are a slew of differences between what's in the game's data and what's actually in the game.

Unless noted otherwise, all the text seen here was ripped from GAMETEXT.bin. Any text that is italicized was transcribed.

Additional leftovers exist in the Star Fox Adventures July 2002 demo. A full N64 build dating from December 2000 was released by Forest of Illusion on February 20, 2021. 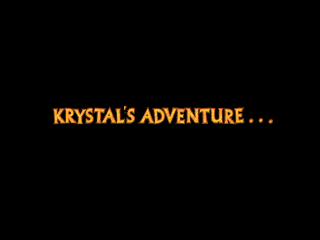 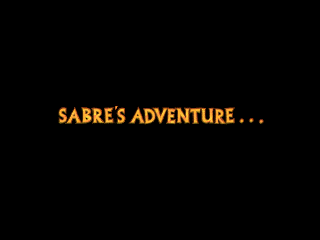 SCREENS.bin contains two splash screens that were used when starting off the original protagonists' stories.

A very small remnant of Dinosaur Planet's HUD can be seen with the texture files.

This image is used for the "Unknown" item in the inventory, which is never given to the player. Appeared as "Warp Crystal" in the Dinosaur Planet prototype, where it was the first item acquired.

Some of this very same cutscene can be seen in leaked Dinosaur Planet N64 footage.

The creators had a very different endgame in mind - one that obviously had less Star Fox elements. This section refers to a scrapped plot to recover the fifth SpellStone from two time periods before it disappears in the present. The other speaker is a dying physical Krazoa being who originally gave some exposition of the larger plot.

Strangely, there are two different variations of this dialogue remaining in the game's data; one with Sabre being mentioned, and the other with Fox.

A reference to two characters not in the final version.

A very similar line is in audio form, but Sabre has been replaced with Fox. What's even being referenced here is unknown.

This implies that eight Krazoa Spirits existed at one point, but there's only six in the actual game. Also, instead of returning them to Krazoa Palace, it appears that they would have been returned through Warlock Mountain.

Dialogue from two characters that were completely removed from the final game, Rocky and Rubble. They would have served the purpose of swapping between Krystal and Sabre.

This line shows up in the N64 prototype, fully voice-acted, which suggests the idea that Fox was a "royal knight" might have been planned as a concept early in the conversion to a Star Fox game.

A removed element of the game was to swap between characters.

Early dialogue with the introduction to Garunda Te, who is referred as a Guardian instead of a GateKeeper. The general tone of the story is similar to the final version, but it is worded differently and the backstory itself reveals that five tribes were responsible for guarding a SpellStone each. Rather than opening the gateway, he only opens a mine.

A slight reference to Randorn was removed and the dialogue was rewritten to mention Belina Te earlier.

The Horn of Truth is most likely an early name for the Dinosaur Horn. The dialogue itself isn't used in the game in any form.

There's no explanation to the race and the cutscenes that play when winning or losing don't have any dialogue from the SharpClaws. Interestingly, the SharpClaw refers to Fox as "Wolf", though this is likely a coincidence if the text dates back to Dinosaur Planet.

A cutscene for when Sabre got a SpellStone.

The wind lifts, the power room, and the royal chamber are all in the final version. However, there was apparently a gunpower storage room, jewel mines, and treasure rooms. Whether or not any references outside of GAMETEXT.bin is currently unknown.

An early version of Sabre/Fox and Tricky being informed of King EarthWalker getting kidnapped.

Tricky's cut Distract command. Note that it was originally going to be Kyte's signature command in Dinosaur Planet.

Early dialogue for meeting with King EarthWalker. Note the odd replacement of Sabre with Fox. This is odd, since Randorn is still mentioned, making this a Dinosaur Planet leftover.

Klanadack and CLANNAD-ack are likely early names for Galdon, judging by the fact that it was found frozen. Also, Belina and Garunda are apologizing to each other, which isn't shown in the final game.

Drakor has practically no dialogue or character development in the final version, but it's implied that he would have been the Great Kamerian Dragon and he would prefer to be rid of the Krazoa Spirits.

A find function is in the final game, but this implies there was more than one sidekick.

Some commands that were removed from the final version.

Fire Spell is probably an early name for Fire Blast.

Something that isn't in the final version, likely because the developers had no purpose to use it in a plausible way.

Another explanation for the Distract command.

It seems that a cinema viewer, as well as big head and giant head modes, were to be in the game, likely as cheats. Needless to say, these are absent in the final game.

In the final game, Krystal largely remains encased in a huge crystal. While she does talk during the main game, she is unplayable aside from the prologue. However, in Dinosaur Planet, she was supposed to be playable along with Sabre, who later became Fox.

Kyte would have been Krystal's sidekick, who would have first been found on the Galleon. While there is a CloudRunner on the ship in the final game, it's just left on the ship and has only a brief appearance.

Said when Kyte and Krystal went to CloudRunner Fortress.

This particular dialogue indicates that five CloudRunner children needed to be found. In the final game, only four need to be collected.

This line of dialog seems to belong to the original scene where General Scales killed the Queen CloudRunner.

In the final game, finding secrets is a skill Tricky has from the beginning.

Unsure who would have said this, but it's likely dialogue from the golden scarab statue near the entrance of Cape Claw or a similar NPC.

This dialogue implies that finding the siblings would have taken a little longer than it does in the final game. It likely occurred after the above conversation.

It appears that Krystal would have been captured at LightFoot Village, instead of Fox. Also, the spellpage in question is instead a Fire Gem in the final game (although the dialogue doesn't specify). A CloudRunner does help Fox, but it isn't Kyte specifically.

Presumably, the climax of the game, where Kyte and Krystal were trapped on a planet.

In the final game, mushrooms are referred to as GrubTub Fungi and Dino Eggs are called PukPuk Eggs. The final game even goes so far as to state the PukPuk Eggs are *not* dinosaur eggs, but rather bird eggs.

These are Staff Energy Gems in the final version. Also, note that the text implies that there are other weapons aside from staffs.

Presumably, Energy Eggs are another name for Dumbledang Pods, as the description most closely matches the final description for the latter.

The final game does have units of energy, but it is limited to the number of magic gems collected.

In the final game, the player can hold up to 10, 50, 100, and 200 scarabs, depending on the bag the player has. At no point in the game is the player restricted to 20 scarabs. Also, the description appears to be a temporary one.

In the final version, it mentions that the Blue GrubTub (mushroom) is the EarthWalkers' favorite food, not just the dinosaurs as a whole. The description is also far longer than what is in the final game, as Tricky mostly describes the fungi himself.

Magic Crystal Plants would be known as Staff Energy Flowers.

It seems like separate GrubTub fungi/mushrooms would have been used for different actions. In the final game, there is only one type of GrubTub used for Tricky.

Presumably would have increased the number of mushrooms carried. In the final game, the player can only carry up to 15 mushrooms and there is no increase in the amount of mushrooms one can carry. It's unknown as to why these were scrapped.

Power Crystals would be referred to as Light Gems in the final game. Oddly, the final game still stays "Place Crystal" when highlighting it in the inventory.

This would likely refer to the flute used to attract the CloudRunner children.

An item completely absent in the final game.

Leftover explanations from Dinosaur Planet, containing references to the Nintendo 64 controller (the GameCube uses a C-stick).

More references to the Nintendo 64, this time referring to the Expansion Pak that the game would have required. There are also early copyright strings.