Originally designed for the Nintendo 64 as Dinosaur Planet with no relation to the franchise, Star Fox Adventures was the last game made by Rare for a non-handheld Nintendo console and the only Rare game for the GameCube. It also has a somewhat divisive reaction, due to its departure from the Star Fox formula.

splashScreen.BIN contains an early logo for the game.

A debug font can be found in several of the texture files. 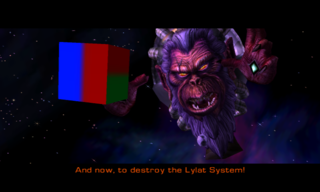 The HUD icon texture includes unused language icons for French, German, Italian, Spanish (Spain), and Japanese. Notably, there is no flag for English, and the French flag is rotated 180 degrees.

Inside GAMETEXT.bin is an early script for the game, with several differences from the final version and even including leftovers from when it was Dinosaur Planet.

Same as the final version, except "The rules are simple" was omitted.

An early version of Fox's introduction to Queen EarthWalker, most likely. The dialogue is very different, including a piece of dialogue written in some early form of Dino language.

The last line was re-written to say "That's right! It was your mother that sent me to find you." and the cutscene was expanded so that Tricky and Fox talk about Queen EarthWalker's illness. Also, note the lack of Dino, making it likely that it's a Dinosaur Planet leftover.

This never happens in the final game, as the shopkeeper is always within the store.

Garunda Te only needs three Frost Weeds to break free in the final game, although he doesn't mention how many of them are needed. The dialogue is also worded differently.

What's odd about this dialogue is that Garunda is still said to be a guardian, but the dialogue is otherwise similar to what's in the final game.

In the final game, there are no instructions as to how to use the jet bike.

This is the same dialogue used when first going to Moon Mt. Pass, but the last line was removed.

Galadon is probably an early name for Galdon.

In the final game, Fox has to get his staff back rather than get a key.

The queen simply never says this.

In the final game, the player is given 2:30 to complete the totem pole test (or the Tracking Test, as it's called in-game). The Test of Strength's descriptions are nearly the same as the final version, but it shows a graphic of the A button rather than simply putting it in text and MuscleFoot isn't described as "mighty".

Presumably said after saving a ThornTail's eggs. She doesn't say this.

Forcing the PDA to be enabled before Fox becomes playable allows you to see unused Slippy's Advice text for Krazoa Palace, as well as the descriptions for the ThornTails in the area, which are simply blank. 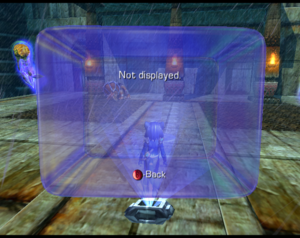 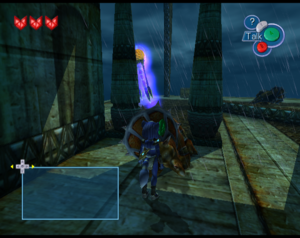 In unknown circumstances, while climbing a ladder, the A button text on the HUD is set to "Rob" instead of "Slide". This text is otherwise unused, and is not displayed. This may have referred to the character ROB, rather than the act of robbery.

If the game takes more than 10 seconds to load at startup, the text "Loading..." appears. However, this normally never happens. The Gecko code will force it to appear. 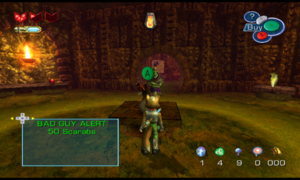 This item would have been sold in the ThornTail Shop for 45, 47, or 50 scarabs, depending how generous the shopkeeper is feeling. It's set to never be available, and in the final game, Tricky has this ability from the beginning.

Fox's PDA would have also been for sale, at a price of 18, 20, or 22 scarabs. It uses the same text as Bad Guy Alert. It's set to be available if you don't already have the PDA, but since Fox starts with it and never loses it, this can never happen.

Even if these items are forced to be available, they're nowhere to be found in the shop. The PDA has an object (SPPda), but forcing this object to appear just displays the placeholder cube and doesn't allow any interaction. There is no object associated with Bad Guy Alert.

Some items appear in the inventory, and have a description implying they could be "used" in some context, but there never is a situation in which they can actually be used in this way.

Dinosaur Planet for the N64 used a "dynamically loaded library" (DLL) system to automatically load code into memory as needed and unload it when finished, to reduce memory consumption. The final game still technically uses this system, but since the GameCube has plenty of RAM (and discs are much slower than cartridges), all the code is kept in RAM at all times, and "loading" or "unloading" a DLL does not actually do anything other than change a reference counter. As a result, much of the code written after the switch to GameCube does not bother to "load" a DLL before using it.

The file DLLS.tab would have been used to look up code in the corresponding DLLS.bin file, which is still present in the Kiosk Demo disc, and contains code compiled for the N64.

Setting byte 8CA of the player state to 1 activates this unused teleport effect, which draws a plane in front of the player. It's quite imperfect, as it hides other objects as well, and the player's tail can poke through it.

To see it in action, use the following Gecko code on US V1.0 and press B: 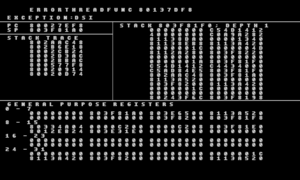 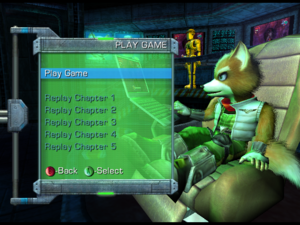 Two cheat codes exist on the save file select screen. Both must be entered after selecting a file but before starting the game, and while holding Z. Each button must be pressed within 1/4 second of the last. If successful, a chime will sound.

Press X, Y, X, Y, L (all the way down). This enables displaying error messages if the game crashes. Alternatively, use Action Replay/Gecko code 003DDA28 00000001. (The same code will work for both.)

Press D-pad Down, D-pad Up, Y, Y, R (all the way down). Start the game, and you'll be able to choose a chapter to start from. Selecting a chapter will replace the selected save file with one from the disc (in path "/savegame/saveN.bin" where N is the chapter number). This will also change the name of the selected save file to "FOX". Alternatively, use the following Gecko/AR code and just press Z.

Selecting Chapter 1 will start a new game, just like selecting an empty save file normally. This, however, is a bug - save1.bin actually starts in the Walled City, and can be accessed by swapping it for one of the other files in savegame.

This feature has another minor bug: if you press B to back out of the chapter list and instead select a different save file, the chapter select will display, but with only the "Play Game" option.

These messages can be seen in Dolphin's debug console. (You may have to add the symbol OSReport at address 8007D6DC for it to pick up the messages.) 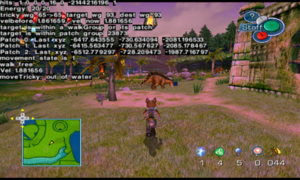 Alternatively, this Gecko code will display them on-screen (assuming you used the "enable debug text" code):

Adding the line c6148bc8 80137948 will also display a ton of Tricky-related debug text. Adding c607d6dc 80137948 will display all OSReport messages, including those that weren't intended to show on-screen, which allows them to be seen on a real GameCube without any hardware modification. 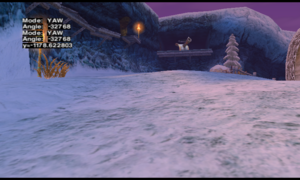 The "directional light" object (internally named "LGTDirectio", ID 0079) has some leftover debug code attached. Pressing Z toggles the debug function on/off. When on, you can supposedly use the D-pad to adjust the light's color and direction. However, this function no longer actually affects the light. This function is always active when such a light is present, but you can't see what you're changing without having debug text enabled.

At any time, you can press A on controller 3 to print some memory usage stats to the debug console, or B to trigger a texture refresh. However, the function that reads controller inputs only reads controller 1. The code 00014E73 00000004 will make it read all four controllers, enabling this function and possibly others.

An error message that would have been used whenever an incorrect string of text is referenced.

Scattered throughout the file is a list of early credits, missing all of the publisher credits and being fairly unfinished.

A few files are left over and never accessed:

Others are loaded, but don't appear to actually be used for anything:

Some files are older versions of others:

Inside the boot folder, there are some .c files for all the languages (except Japanese) with a '.new' extension added. Shown below is English.c.new. The other files are more or less the same, but with the strings translated.

Another source file, audio/starfox.h.bak, contains lists of sound effect IDs, though they don't match up with the final version.