Star Fox 2 is (as you may have guessed) the sequel to Star Fox, greatly opening up exploration and adding a large number of new features as well as the ability to play as Peppy, Falco, Slippy, and new crewmembers Miyu and Fay.

Turns out Andross isn't actually dead (what, you thought that cube inside a polygonal white face was actually him?), and he's launched an all-out assault on the Lylat System. While the map is open to you to go anywhere you want, this is also true for Andross' forces, even when you're in levels - and for the most part they'll be heading toward Corneria. As such, the Star Fox team needs to liberate planets while making sure Corneria doesn't take too much damage, because if Corneria is conquered then Andross wins.

By the time the game was completed in September 1995, the Nintendo 64 was around the corner, complete with its own Star Fox title in the pipeline. While Star Fox 2 had been planned for release in 1996 or possibly '97, it seems Nintendo didn't want to cannibalize sales of its new console by giving the SNES a cutting-edge 3D game on its way out the door, and Star Fox 2 therefore got resigned to the dustbin of history - seemingly forever. Elements from the game were incorporated into Star Fox 64, Star Fox Command, and Star Fox Zero.

Prototypes of Star Fox 2 were leaked online as early as 1999, cementing its reputation as one of history's most famous unreleased games. Two decades after its cancellation, the finished game finally saw the light of day as part of the SNES Classic Edition, with the ROM getting dumped and leaked on the same day as the console's release. Star Fox 2 was also released for Nintendo Switch on December 12, 2019 as part of the console's online subscription service. 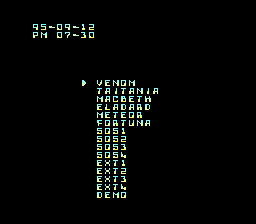 On the main menu, use Pro Action Replay (PAR) code 03F0B603 to access the Test menu or 03F0B604 to access Training mode. Both of these options were present in the June 22, 1995 build, but were disabled for the final.

These codes also re-enable the Expert Mode menu option by default (as was the case in the June 22, 1995 build), though selecting it redirects the player to the Test menu instead.

One noteworthy detail is the top-left corner of the menu, which lists the game's build date as September 12, 1995. Since the game's original release was cancelled outright there's no way of knowing for sure, but a build date of September '95 wouldn't be out of line for a Q1 1996 release. 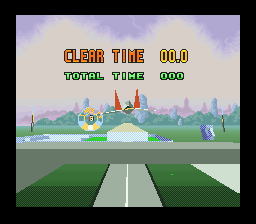 By promptly turning off the cheats after accessing the Test menu, selecting Venom level 06 sends the player to the earlier Secret Base that was seen in the June 22, 1995 prototype. This version appears to have been worked on since then, as the Homing upgrade is now present. However, due to there being no target to destroy, a stage clear message will display immediately upon entering and will send the player back to the Test menu.

Present at 0xE07 in the ROM is a build string from an early prototype of the first Star Fox, when the game was intended to be a new entry in Argonaut's Star Glider series rather than an original Nintendo IP. (A build of Star Glider for the SNES was eventually leaked in July 2020.)

As strange as it is for this to be here, it's even stranger in that this string doesn't appear in any version of Star Fox itself.

Present at 0x6BA76 is an ASCII art credit for programmer Dylan Cuthbert, at spacing of 64 characters per line:

The graphic of the six playable characters displayed on the title screen has a few coloring discrepancies when compared to other character artwork seen throughout the game:

The S and F are raised in the logo for the international version, and level with the rest of the text in the Japanese version. The logo font as a whole is slightly different between the two.

Similarly to the Falco voice line in the ending, the results screen also changed the "ANDORF DESTROYED" text to "ANDROSS DESTROYED" in the international version.

(Considering the long gap between these two thematically-different bits of music, it's fair to say they are probably two separate pieces.)

If the game detects that a Super Scope or SNES Mouse is plugged in either port, this error message will be displayed. This ended up going functionally unused, since the player is hard-coded to use a standard controller in the SNES Classic and Switch Online releases.