Star Fox Assault returns the Star Fox series to its space combat roots after the previous game in the series, Star Fox Adventures, took a more action-adventure approach. This game was also planned to have an arcade counterpart, but the idea was scrapped.

An unused "game over" track, sounding a lot like the one used in Star Fox 64.

An unused theme that sounds eerily similar to the theme for Aparoid City in multiplayer.

Whenever anyone speaks during a mission, their name appears above the message box. Curiously when viewing the graphic with the full list of names, Tricky is included despite him only being present during a cutscene where there are subtitles instead. This suggests that he either spoke to you during the mission on Sauria or that the cutscenes originally had transmission boxes instead of subtitles.

The ISO contains an unused movie file entitled "Dummy.sfd". It's a copy of the cutscene that plays after Mission 5 (The Aparoid Menace), in which General Pepper congratulates the team for their good work and Krystal senses a distress call from Planet Sauria. The cutscene uses the audio from the Japanese version of the game.

Almost every stage from single-player is playable in multiplayer, but almost all of them have minor changes, such as areas of the stages being removed. However a few of these stages still have leftovers from the single-player versions. 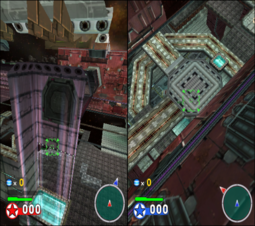 The elevator only travels between the first and second floor of the Hideout, and the third floor has now been blocked off by a large door. 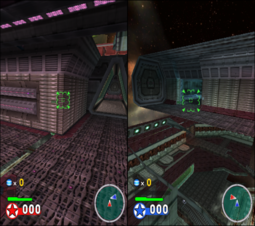 Despite this, the third floor is still fully modeled, and can be seen by moving the camera in an emulator. 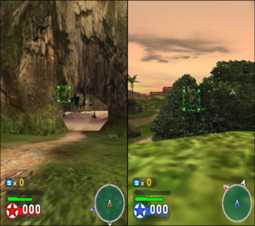 The cave under the first large temple is no longer accessible, as its entrances have been blocked with large boulders, but the entrances are still present and can be seen by moving the camera through the rocks. 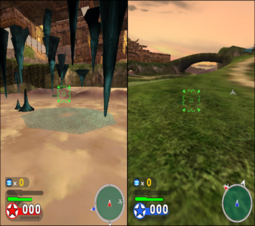 While the cave itself has been removed, the Stalagmites, Stalactites and the pool of water are still present for some reason.

During briefing scenes, it's impossible to see any of the characters below the waist, so their models are cut off at the waist or knees.

However, by moving the camera in an emulator we can see that, despite this, Falco and R.O.B. are fully modeled during briefings.

There are also features on the backs of certain characters that are otherwise unseen by the player, since the models are only viewed from the front.

Examples include General Pepper's tail and the Space Dynamics logo on the back of Beltino's coat.

There are several files that never seem to be used when loading a map in multiplayer mode. Forcing a particular set will take you to an incomplete version of the arena where Star Fox face the Aparoid Queen. Flying near the edge will load the same model used during the first phase of the battle, while the background of the stage (which can be seen due to the short draw distance) matches the one during the second phase. Given that, after the alterations, the arena still loads as normal in single-player, it seems that it was once meant to be an option as a Vs Mode stage.

The listing of the files used are very consistent in that they always come after the Vs Aparoid City level. This extends to the music file detailed above, which may have been for this stage.

Examining the files within the ISO reveals some indication about features that might have been included, but were removed before the game's release.

The folders containing sound files for Vs Mode jumps from “vs_chr5” (Peppy) to “vs_chr8” (Wolf), suggesting at some point there were two additional characters planned. When taking the order of the curtain call during the credits into account, it is most likely these characters were Panther and Leon.

Within the list of assets are files called tutorial_1 and tutorial_2, hinting that there were once two levels/sets of menu screens dedicated to showing the ropes to the player. These files are empty and, when loaded, either cause a very incomplete version of the replaced level to appear (when used in single-player), no changes whatsoever (on a menu screen) or the game to crash (Vs Mode).

On top of having Xevious as an unlockable extra, the Japanese version has Battle City and Star Luster unlockable as well. The latter two are still present in the international versions, but only accessible with cheat codes.

In the game's startup, the Nintendo logo was changed blue to red.

In the Japanese version, there were two registered trademark symbols. The copyright info was updated in the International version.

In the cutscene after fighting Oikonny, when the strange Aparoid appears, it fires a beam at one of the characters. In the Japanese version, the dialogue shows the beam is fired at Slippy. On International versions, it is shown to be fired at Krystal.

Interestingly, in the Japanese version of the game, the characters are more facial and expressive to each conversation in the briefing scenes. They blink often and have much smoother motives similar to the pre-rendered cutscenes. In the international versions, all of it is removed and the characters are bland and expressionless. The reason for the removal is likely due to having the character's movements re-synced to their English dubbed voices.