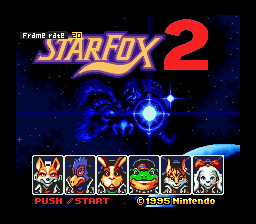 The June 22, 1995 prototype of Star Fox 2 was leaked on August 30, 2002, by an anonymous person who found it on a presumed developer cart; according to him it was non-functioning and contacted Dylan Cuthbert (programmer of Star Fox and Star Fox 2) to help him get it to work; according to Cuthbert, the ROM was missing its header which was manually restored and then released online shortly afterwards.

The build was long thought to be virtually complete, barring the presence of various debugging features and a few bugs, as well as some missing encounters and Rogue-like gameplay, though the eventual release of the completed game in 2017 (as part of the SNES Classic Edition microconsole) showed this build to be less finished than once believed.

Through a bit of modding, this prototype received a hack with the debug features disabled, as well as an English translation. 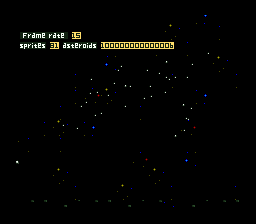 The Record screen was completely reworked between this prototype and the final game. This prototype's Rank uses a star-based rating, as opposed to the letter-based rank given in the previous build and the final.

Although the prototype displays the Shield icon correctly in-game and on the character select screen, it seems to use an incorrect palette on the Lylat System Map. This was corrected in the final game. 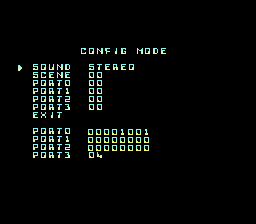 Accessed by the CONFIG option on the title screen.

The SCENE and PORT 0 options allow you to play the background music, the SCENE option controls the Level to load, while PORT0 allows you to select the different music in the selected level.

In the Test menu, if Venom is selected and Planet Step is set to 06, an unfinished, daytime version of the final's Secret Base can be entered. According to the HUD, there are 9 targets (presumably switches, as this map doesn't have a boss enemy), though there appear to be no shield switches anywhere nor a "base" into which to proceed. There are a few things that can be shot and destroyed, but they do not count as targets. This build always defaults the target count to 9 when accessing a stage via Test, most likely for extensive testing purposes. There is one item on top of the "church" that can be collected by destroying the thing on top, but it is otherwise useless.

Collision is seemingly worse than the rest of the accessible stages. For example, the Arwing can be hit when it is clearly not touching the buildings, and the non-moving "enemies" that can be shot and destroyed may have to be shot multiple times before they can actually be hit.

Oddly enough, this unfinished version of the Secret Base still exists in the final game.

Two voice samples (one male, one female) that say "1-Up!" Presumably the female samples would have been heard if the player was using Miyu or Fay.

Unlike the final build, the prototype does not play the first game's Corneria theme on the Pilot Select screen after scoring a Star Rank in Expert mode with all characters. Still, the track itself does exist within this build, though it doesn't play at any point.

Though not used here, a slightly earlier version of the group shot of the playable characters present on the title screen of later builds exists here. It can be found in the block of 2D Super FX graphics between 0x90000 and 0xA7FFF in the ROM.

The STAR GLIDER 01 NOV 1991 string at 0xE07, which remains in the final, also appears in this build.

An ASCII signature for Dylan Cuthbert can be found inside the ROM at 0x6BBA2 and is the same as the one in the final version.