This is a sub-page of Super Mario Sunshine.

The giant eel boss in Noki City has its esophagus and stomach modeled with a significant amount of polygons. Even though one of its attacks involves swallowing Mario, the camera never follows him inside, so the insides are never seen.

The side of the cork Gooper Blooper has in its mouth in the first part of the boss fight, bgeso_kolk and bgeso_kolk_break says either "bsgeso kolk" or "bsgeso 2002" on the side. Since most of the cork is in Gooper Blooper's mouth and it breaks almost immediately upon being pulled out, this cannot be clearly seen at all.

While Il Piantissimo never removes his mask, he does have a complete head and face underneath, which can be seen if you remove his mask via hacking or other methods. 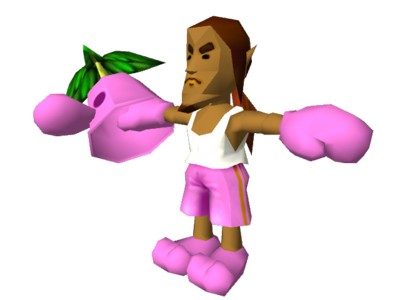 Interestingly, Piantissimo's real identity seems to be the Running Man from The Legend of Zelda: Ocarina of Time (or the Postman from Majora's Mask), though here he has an angrier expression, darker skin, and a goatee.