The Legend of Zelda: Majora's Mask

In The Legend of Zelda: Majora's Mask, Peter Pan and Tinkerbell race to save Termina from a sapient hunk of green cheese. 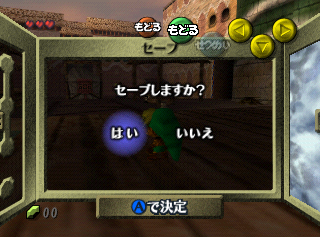 Press L to activate save screen in the pause menu:

Press L to activate "save after death" screen in the pause menu: 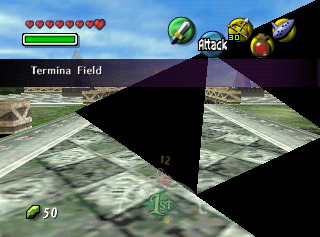 The game contains some leftover blank mini maps that were used as placeholders before the real ones were designed.

Nabooru in the Iron Knuckle 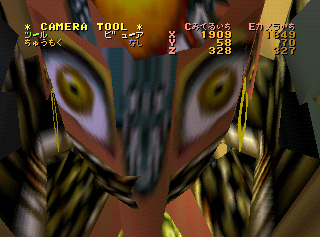 The model of the Iron Knuckle is almost the same as in Ocarina of Time. As such, it still contains the early version of Nabooru's head inside. 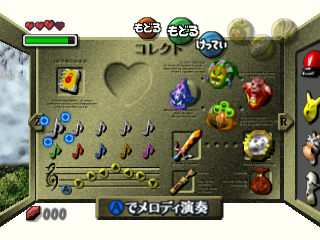 One unused song can be found at the end of the list of songs used in the Quest Status subscreen. The song is at offset 0x0C8AC27 in the decoded Japanese version 1.0, and may also be present in other versions. It contains eight notes and is played with A, C-Down, C-Right, C-Left, C-Up, C-Left, C-Right, C-Down. 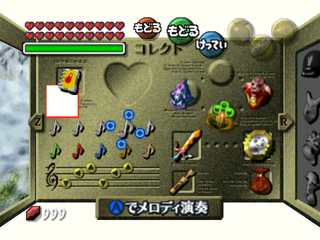 The white square indicates the location of the slot.

There's an unused item slot in the Quest Status Screen. This is likely a leftover from Ocarina of Time, which featured the Gold Skulltula icon in that position. The coordinates of the Japanese version 1.0 is 0x0CC7856 horizontal and 0x0CC78A6 vertical. 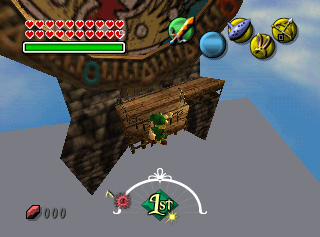 A piece of official concept art from Majora's Mask showcases the earlier design. The entrance looks different; most notably there's a fence and a path leads off to the right, which suggests you could simply walk up to the Clock Tower.

Going west side of town you may see slight differences on the south side of the city. One can notice a wooden railing, Maybe the entrance to the tower is there before. The wall on the left is missing painting and the ramp near the owl statue is a piece of wood instead of bricks. 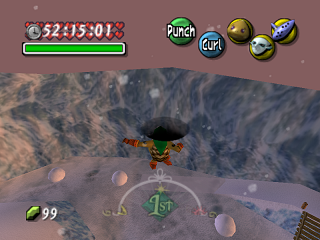 In the winter version of the Twin Islands map (the area linking Mountain Village and Goron Village), there's a grotto hole suspended high in the air. It cannot even be seen, let alone reached, unless you use a moonjump code to hover over to it. Entering the hole leads to one of the Termina Field grottoes with a bunch of Gossip Stones.

In the Link trial dungeon on the Moon, playing the Song of Storms in front of the Gossip Stones sets flags that are also used to mark the completion of the trial's challenges, such as destroying walls and pressing switches. This causes two bugs that are well-known in the speedrunning community:

Both of these bugs are still present in the 3DS remake.

A similar instance of conflicting flags plagues Termina Field. When the player approaches the fence that leads to Great Bay, a message from Tatl is triggered, which sets a flag that is also responsible for planting a Magic Bean in the patch of soft soil next to the Astral Observatory. As a result, triggering Tatl's message causes a bean plant to appear in the soil when the area is reloaded.

This bug is also present in the 3DS remake. 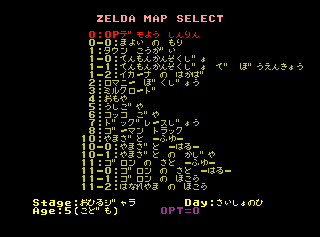 Just like its predecessor, Majora's Mask contains a map select which allows you to warp to any map. The map select does not differ too much from the one in Ocarina of Time, but it has an additional option for selecting the day.

The non-Debug ROM version of the Map Select will, by default, drop you off in cutscene 00 of each map. The corresponding cutscene will not play, resulting in the interface being disabled, actors and objects being shuffled around, and exits not leading to their correct destinations. This also means that cutscenes with no maps can't be accessed. However, the codes on Notes:The Legend of Zelda: Majora's Mask allow players to get around this issue.

Further information on Map Select, including codes to enable it and information to navigate it, is available on the Debug ROM's map select page. 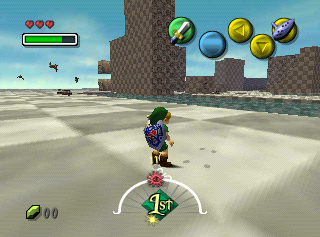 There is a test map named "Test01" exclusive to the two N64 Japanese versions of the game. You can access this map by setting the OPT= parameter on -1 on any line of the Map Select. The other method is to use GameShark code below.

The map is exactly the same as the test map from Ocarina of Time, however it actually contains some objects:

This map features 10 alternate setups that can't be accessed normally through the Map Select, as they're unreferenced by the scene and room headers. However, almost all of them can be accessed in the Debug ROM.

If you leave this map in any way (either by walking off the edge, drowning in the water or getting crushed by the Stone Tower blocks) you end up in the uncursed Southern Swamp next to the boat, with a rather glitchy fade-in. 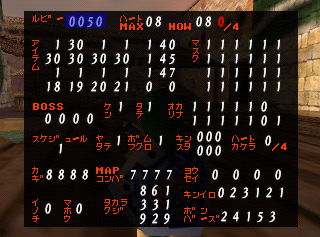 The inventory editor from the debug ROM of Majora's Mask is still present in the retail version. Although not accessible normally, it can be activated through a rather complex glitch that crashes the N64. It can be opened in the Virtual Console versions, but can only be interacted with on the Wii U due to the Wii not having the D-pad mapped. To activate it, use the GameShark codes and press Start to open the Pause Menu, then L to open the Inventory Editor.

A build date can be seen in the crash debugger and can be found in memory. 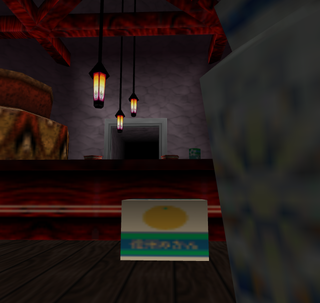 A box of oranges is present in the Potion Shop, serving as a seat for Kotake. The box is adorned with text reading "Satsuma Mandarins", written once in kanji and twice in kanji and hiragana, making it one of the few examples of non-Hylian writing in Majora's Mask. The box is still present with updated textures in the 3DS remake, and can be seen due to the changes in the camera mechanics allowing the player to position the camera behind the counter. 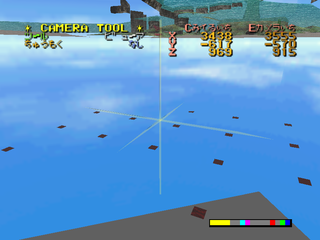 Located in the southern part of the Great Bay are 17 large squares with the texture of the water, but red and completely inactive. 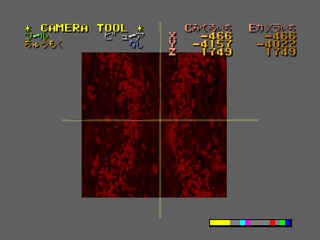 It is possible that these squares were used by the developers to measure distance.

There are also five squares underneath the entrance to the Great Bay Temple, located on the sides and center of the sea. 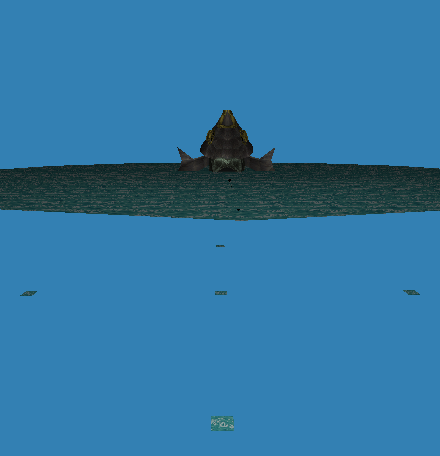 In the cutscene where the Four Giants stop the Moon, it is facing upwards, away from Clock Town. After that scene, however, the Moon returns to its original position.

In the cutscene where the Moon is falling, there happens to be a second Moon inside the one that you normally see. By looking closely at the video, as well as by using the images above, you can see that the second moon seems to be the Moon that's loaded in the "On Top of the Clock Tower" Scene. 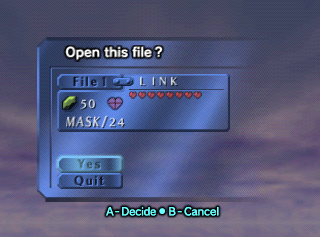 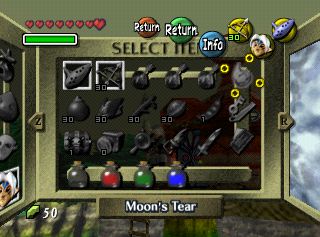 While technically not unused itself, the title screen is actually using a debug save file. You can access the save file with the below code. This will give you all equipment, songs, and most upgrades. If you're using this on the international version of the game, it will start you out in the title screen when you first load the file, so it's advised to use a warp code to go to another area. On the Japanese version it starts you out in Clock Town on Day 1. The save will start you out as Fierce Deity Link with the mask also equipped on C-Down. The file name will automatically be named LINK. Make a save file in slot 1 with the code on.

At the end of the intro cutscene, when Link is thrown off Epona and gets back on his feet, Link is crushed to Deku Link's size up until you gain control. This strongly implies that this cutscene was originally designed around Deku Link.

Setup 03 of Romani Ranch (the cutscene where Romani gets kidnapped by the aliens) has the background music set to 0x56 (Milk Bar duplicate), as seen in the Sound settings (0x15) scene setup header command, at 0x270AC00 (decompressed JPN v1.0). However, this doesn't actually play as the alien music doesn't stop when the cutscene activates. In order to hear the Milk Bar music, the player must use the Map Select to warp directly to the cutscene.