This is a sub-page of Proto:The Legend of Zelda: Majora's Mask. 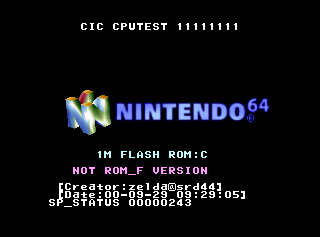 To start the game, it is necessary to have Controller 2 plugged in on power-on. Otherwise, all debugging features will be disabled, and the game will run noticeably slower.
Debug ROM Download Link

Interestingly, the game was compiled about only a minute before the first European revision of Majora's Mask.

The Debug ROM contains an overdump of the The Legend of Zelda: Ocarina of Time, including maps, scenes and textures that are byte-to-byte the same as the GameCube game and iQue versions. For example, the Gerudo symbols in the overdump reflect the new GameCube design, rather than the original Ocarina of Time moon and star. The Ocarina of Time files were written onto the cartridge prior to the Majora's Mask Debug September 2000 build, meaning that the map changes seen in the GameCube game and iQue versions were made at least two years prior to their releases in 2003. This overdump starts at 0x02100000 and ends at 0x035C1000 in the ROM. Files from the overdump have been extracted, and are available here. 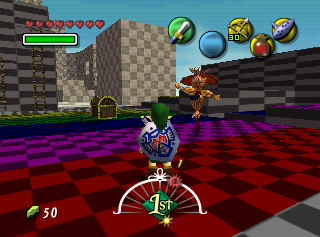 The Test Map from the Japanese version of Majora's Mask is also in the Debug ROM. However, it's not accessible from the Map Select, instead, you'll need to use the following GameShark code: 8023F792 0010. Don't enable it when the game is starting or the game will barf a big red "RDRAM BROKEN!" message at you on the title screen. Instead, load the game, enter the Map Select, enable the code and select the first map.

While the map is the same the contents of the default setup are quite different when comparing to the same setup from the Japanese version. You start off in the multicolored area with the scarecrow right in front of you. Behind him is a treasure chest containing the Mirror Shield. Leave the area and go to the right in the open field to find the Goron Elder and three copies of the Happy Mask Salesman. One is standing upright, one is down on the ground and the third copy has only his bag of masks. The one standing on the ground can be Z-Targeted but none of them can be spoken to. There are also invisible rupees if you can find them, one green, one blue and one red.

Much like in the Japanese version, the Test Map here features 10 alternate scene setups. However, here they can be accessed, by adding the following line to the Gameshark code above: 8024343F 000X, where "X" = a setup from 1 (Setup 00) to 9 (Setup 08). The last setup (setup 09) can't be accessed using this approach, however, as it's not referenced by the scene and room headers.

This setup features Tingle floating in front a ReDead, and various pink arrows scattered through the map that will turn red when Link is close to them. An instance of the actor "En_Okarina_Tag" is placed in front of Link's spawn point.

This setup only has one actor, Skull Kid, standing in front of Link's spawn point.

This setup seems to be almost identical to Setup 01, albeit with Skull Kid being moved slightly closer to Link's spawn point.

Setups 03 to 09 seem to be identical to each other. They are almost the same as Setup 00, albeit with the "En_Okarina_Tag" actor rotated slightly different.