The Legend of Zelda: Skyward Sword

This time, Link lives in a huge floating island known as Skyloft, Zelda is no longer a princess, and the controls are based on Wii Motion Plus gestures.

This unused area is accessible by using the Action Replay/Gecko codes for "Moonjump" and "Levitation".

By starting at the Temple of Time map (F300_4) and using moonjump to bypass the cliff to go into Lanayru Desert, you will stay in F300_4 but be placed in a low-poly version of an early Lanayru Desert. Alternately, this same area can be accessed by using "Back in Time" glitches, as can be seen in this video.

A wall behind the bird statue is visible, which does not appear in the used Lanayru Desert map, as the Timeshift Stone isn't present. 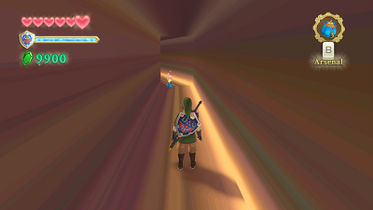 This strange corridor is located between Lanayru Desert & Temple of Time (F300 and F300_4). This area cannot be accessed normally and was likely planned to be used at some point in the game. 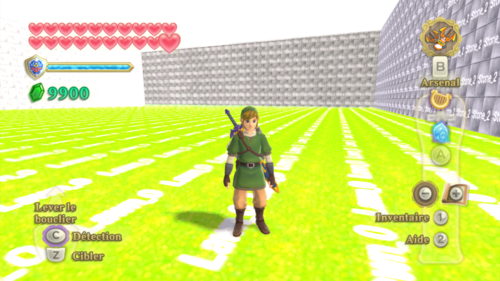 There's a simple test map in the game. It's just a square room, with no ceiling. The floor's patterned with a grass-like texture with Lawn_0 written on it, and the walls with a stone/steel texture with Stone_2 written on them. These textures are presented below. Also below is a video of this test room:

This room contains an actor setup (13) which enables the end credits of the game. The file that contains this actor setup is called Demo_stg_l13.arc.LZ.

F405 which is used for the first cutscene of The Imprisoned has the same collision as the Demo map.

Groose has a punching bag with a drawing of Link's face on it. In the game, that drawing depicts homely Link, with casual clothing (right). This texture is found in Stage\F001\F001r_stg_l0.arc\oarc\DecoC.arc\g3d\model.brres (punching bag's model). However, in Stage\F001\F001r_stg_l0.arc\g3d\stage.brres (general Academy textures) there's an unused texture for a punching bag drawing depicting Link with his uniform's hood on (left). It's unlikely the drawing was meant to change mid-story. A placeholder drawing was probably made first, featuring the character they had at the time — uniform Link — until it was later changed to homely Link, to fit with the actual storyline.

An aliased version of Groose's painting's texture, seen on the left, exists in Stage\F001\F001r_stg_l0.arc\oarc\Paint.arc\g3d\model.brres (files regarding paintings). It looks a bit worse than the one on the right. The latter is in the same file, and it's called tanen[1] for some reason, but there's another copy of the first one in Stage\F001\F001r_stg_l0.arc\g3d\stage.brres, the file with almost all other Academy textures. It's likely that the one on the right is the one that's used, but that is yet to be confirmed.

A model of a disc, probably belonging to the harp platform in the Tower of Light, exists in Stage\F000\F000_stg_l4.arc\oarc\SwitchHarp.arc\g3d\model.brres. Its texture is half of the Triforce symbol, with "TEST" written on the side.

Gaebora's naked model (that luckily ends by the waist), has a really tiny dummy texture in the "eyes" category.

Found inside Stage\F001\F001_stg_l0.arc\g3d\stage.brres\Textures is this small blue texture with what seems to be an arrow.

"DummyWater", found in Skyloft's textures, in Stage\F000\F000_stg_l0.arc\g3d\stage.brres\Textures. These textures are visible on a 3D model of Skyloft Lake.

Karane has animations for when she's being blown by the Gust Bellows. You can't use items indoors, and she's only outdoors before you obtain that item making this animation impossible to see in-game.

The E3 demo had the options in the file selection screen replaced with options for each of the three modes featured in the demo. The text for it is still left over in the retail game.

Unlike in The Wind Waker, all of the (minor) voice acting remains the same as in the Japanese version. The Japanese text is also centered, like it has always been the case since Ocarina of Time (but not in the GBA games). It also scrolls considerably faster than in the localized versions.

Some localization differences are also present.

It is unknown why this change was made. The presence of a run-on sentence in the North American release suggests it may be the version written first, with the text cleaned up by the European localizers.

...Technically there is time to admire it, just not now.

It's possible that both of these differences are due to translators interpreting the original Japanese differently. In this case, it would seem that the European translation is more literal than the North American version.