The Legend of Zelda: Twilight Princess HD is a port of the GameCube/Wii original, but in high definition. Now you can hunt for golden bugs in crystal-clear quality!

Are you a bad enough dude to save the Twilight Princess in high definition?

The folder DebugSaves features 189 save files for normal and hero mode.

A debug font found in the game's executable.

Icons of the Goron's Bracelet, Hylian Shield, and Mirror Shield from Ocarina of Time. The Mirror Shield previously appeared in Twilight Princess. It should be noted that these icons are completely unique to Link and Midna's adventure.

The known unused enemies from the GameCube and Wii version did not get lost during the conversion process.

This unused Beamos looks very similar to the ones from Ocarina of Time and The Wind Waker. It's unable to attack Link, and hitting its head with any weapon will make it disappear. This enemy is named "lv6bm".

The term "lv6" refers to the Temple of Time, so it was likely meant to appear there. 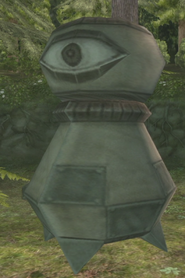 This enemy is completely invincible, and its smacks are very, VERY effective against Link. For some reason, the game is unable to render this titan, and so it's invisible. However, you can still see its shadow on the ground...and it can still pack a wallop!

The following code will replace Epona with this Armos: 1062B0C8 01EFFF00

This enemy consists of a bunch of Gorons that fuse together into a giant golem-like enemy. When fused, its collision is unable to interact with Link - its smacks simply phase through him.

Hitting this enemy with the sword doesn't cause any damage. However, the collision of a single Goron is still able to interact with Link. This enemy is named "B_go". The "B" always indicates bosses, so it can be concluded that this was intended to appear as a boss in Death Mountain's dungeon. 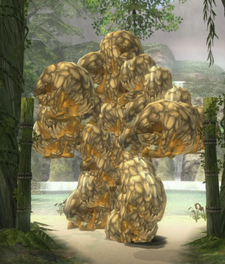 This unused enemy was, very likely, an early version of the monsters that come out of the portals - the creatively named "Shadow Beasts". It can be seen in action in an early 2004 E3 trailer.

This unused Deku Nut is pretty tough - Link can pick it up and throw it anywhere, but it won't seem to crack. Instead you will just hear a metal-like noise.

You can, however, crack it open with a bomb. When thrown into water, it defies the laws of physics and floats on the surface.

The following code will replace Epona with this Deku Nut: 1062B0C8 02FFFF00 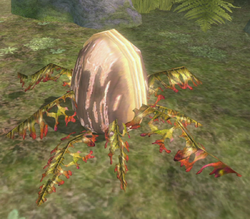 This Bomb Flower has a similar behavior to the Bomb Flowers from other Zelda games - namely, it grows bombs. Duh.

In the HD version, its blue sphere becomes improperly rendered and remains invisible.

The following code will replace Epona with the Bomb Flower: 1062B0C8 02C0FF00 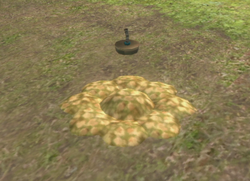 These two trees can be found inside of "Obj_ki.arc". They don't differ that much from one another, except that "y_kia.bdl" has a hole on its trunk, possibly used to hold a chest or item.

This unused room was likely a test level for the miniboss of "Snowpeak Ruins". The textures do not appear because of the updated file formats, similarly to the Armos Titan and the Bomb Flower.

The last archive in the Stage folder contains an area with no objects. 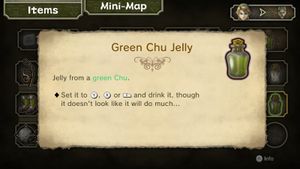 The game still has the green potion that was left in the original. However, it remains unused, as the game does not feature a magic bar. 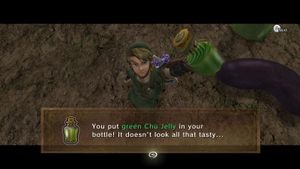 Pretty much the same as the Magic Potion. It's obtainable in normal gameplay. Surprisingly, text has been added, whereas there is none in the Wii release of the game.