This page details one or more prototype versions of The Legend of Zelda: The Wind Waker. 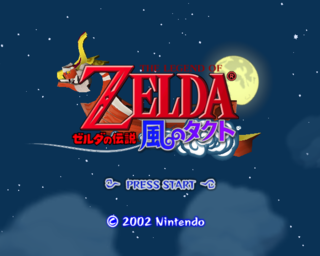 This prototype of The Legend of Zelda: The Wind Waker was discovered on a Japanese GameCube demo disc titled Monthly Nintendo Store Demo 1 December, 2002 (月刊任天堂店頭デモ 2002年12月01), which was displayed in Japanese stores in early December 2002 to give customers a taste of the game before its final release.

Built November 18-19, 2002, just over a week before the Japanese final's November 27 build date, there's quite a few differences in here.

Jalhalla the Earth Temple boss is unmasked! This figurine at the Nintendo Gallery reveals Jalhalla with all of his facial beauty.

Tower of the Gods Pillars

Found inside the archive /rel/objects/Hseki/bdl in the demo are six pillars with currently unknown functionality. These are not present in the final game. Below is the object normally found in the archive.

When the island bridge is destroyed, Keese occupy the area where the bridge once stood. This makes it more difficult to use the Deku Leaf to fly across. In the final version, there are no enemies there.

The distant Horseshoe Island model causes a crash on four islands including Outset Island, use this code to delete the model :

The barrier surrounding the final boss fight at Ganon's Tower can sometimes fail to load. When it does not load it is possible to push both Ganon and Zelda off the edge, and they will continue to fight in the void.

Tower of the Gods

There are two pots next to the boss door in the room before Gohdan instead of four.

All Poes in the Savage Labyrinth are blue, whereas in the final game they have several different colors.

The electric barriers on floor 48 are glitched, resulting in odd visuals and strange collision.

There is a fire breathing Moblin statue above the hole on floor 50.
Only dark floors have torches next to the holes to the next floor unlike in the final game.

There are 6 pots containing a total of 600 rupees on the last floor, instead of no pots as in the final game.

The image used to represent the Tower of the Gods is this...blob. Very interesting.

The three skulls in the top-left were replaced with more text.

The demo chart is missing the Heart Piece for Seven-Star Isles' square and the second one for Rock Spire Isle's square, likely because...

The demo chart includes Treasure Charts in the squares for Seven-Star Isles and Tingle Island, plus a second one in Rock Spire Isle's square.

The light rings (six of them versus five in the final) are all in different spots on the demo's chart.

A second platform was added to Thorned Fairy Island's square.

A sub was added to Flight Control Platform's square. 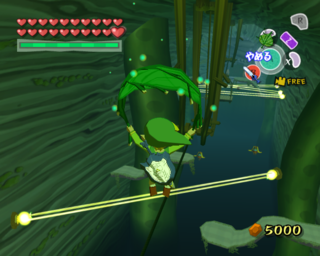 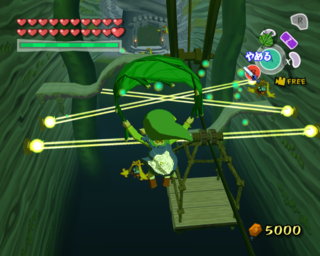 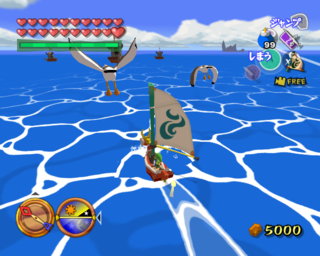 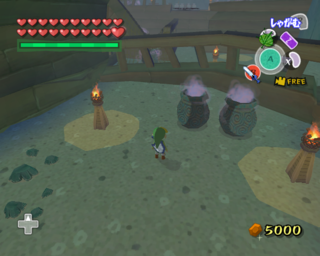 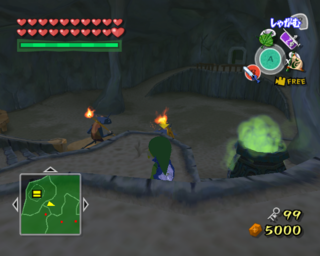 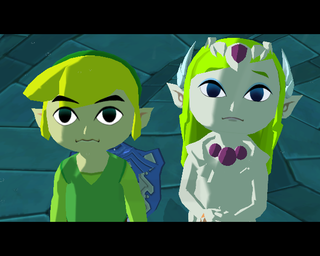 For unknown reasons, Zelda's dress abruptly becomes skin-colored at one point during the final cutscene.

Beedle's ship plays a tune when Link is nearby. This was removed in the final game. 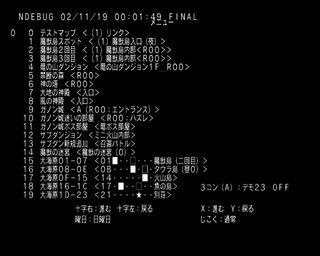 A map select showing the demo's build date. It can be accessed using the following code:

Pressing Y will cause the menu to load when moving between maps, and pressing X will disable it. 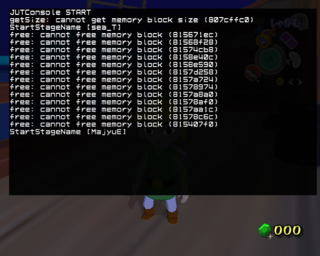 Plug a controller into Slot 3 and press Z to access the game's console. This prints general debugging information, including when errors occur. Hold L or R to scroll up and down the list.

Plug a controller into Slot 4 and press various button combinations to have dialogue boxes appear at any time.