The Legend of Zelda: The Minish Cap

The Legend of Zelda: The Minish Cap is the Game Boy Advance entry in the Zelda series, featuring a talking hat who has got to be related to a particular fairy from a previous Zelda game. 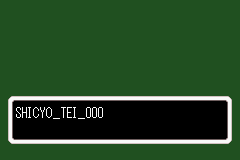 This little green screen contains all the texts of the game, used and unused. To scroll through the texts, just hit Left and Right after you press the L button.

In addition to the five present in the game, there exist two language options for American English and Japanese for the European version's language menu for some reason.

An unused animation of the decorative mailbox above the post office in Hyrule Castle Town. The level of animation suggests that there were going to be fully functional mailboxes in the game, much like with The Wind Waker.

The wiggle animation is actually used in the online Flash demo of the game (archived here). 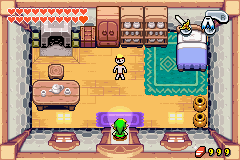 This strange half-naked figure was probably used to test the characters of the game. He has some very strange movements.

Use these codes on the screen "File Selection" to change Link.

These three pieces of stained glass are among the decorations of Hyrule Castle and are visible halfway into the "Hyrule Castle Map Test" at the place of the throne room. They show three of The Wind Waker's major characters: the Deku Tree, Valoo, and Jabun.

The three Goddess Pearls from The Wind Waker also make an appearance, but ended up unused.

Vaati looking to the side. Goes unused due to no situation ever requiring it's use.

Vaati walking to the south. The only time in the game where Vaati walks is during his introduction, afterwards he only ever teleports out. It should be noted that there is no east/west walking animation.

Early sprites for Vaati preparing to cast magic. The final game uses a much smoother-looking animation with 6 frames. There also exist sprites of Vaati's animation for firing off magic, however aside from using less sprites than the final they are identical.

An introduction to the final dungeon that sounds far more dark and foreboding than what the game actually uses. While not used in the game proper, it can be heard as track 2 of the hidden sound test.

Another unused introduction, most likely used for appearances by Vaati.

A Link to the Past Title

A rendition of the title theme from A Link to the Past. It can be heard as track 6 of the hidden sound test, and is used in the Flash demo.

An unused fanfare, from Ocarina of Time. It's the fanfare for getting a Piece of Heart or a Gold Skulltula Token.

The Lost Woods part of the Credits BGM from Ocarina of Time is also present in the game. 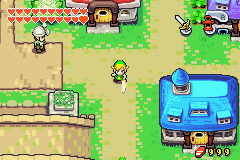 There is one unused sword in the game. Internally within the game, all swords are organized in the order you receive them. For example, Smith's Sword is hex value 01, the White Sword with no infused elements is 02 etc. This sword is listed at hex value 05, which is in between the hex values for the White Sword with three elements and the Four Sword. This indicates that, at one time, there might have been one more sword upgrade before getting to the Four Sword. As it is now, the sword's button graphics use the lantern. In the picture above, it is assigned to button A.

A Fire Rod with a graphic similar to the one used in Four Swords Adventures. While the game does not normally feature the Fire Rod, the description of figurine #108 in the European version of the game says Ice Wizzrobes are vulnerable to it (the North American version instead says that they're weak against fire), so it was clearly intended to be included at some point in development.

Pickup text for the Fire Rod can still be found in the ROM, at 0x9B6CA3:

The item's behavior is internally identical to that of the (DEBUG) Cell Overwrite Set item, documented below. 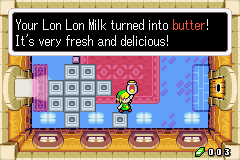 It's... butter. In a bottle. Unfortunately, either its functionality was removed, or it was tied to a character or event that no longer exists.

Three debugging-related items exist in the final game: (DEBUG) Mega Crush, (DEBUG) Enemy Set, and (DEBUG) Cell Overwrite Set. None of them have a proper icon, and the only one that seems to function is Cell Overwrite, which allows you to modify ground tiles in a variety of ways.

In the multi-language European version, only the English and French scripts have actual names for these items, and the French script uses romanized versions of the Japanese names ((Debug) megacrash, (Debug) teki set, and (Debug) cell kakikae set). All other scripts have single null values (00) where the names should be.

Controls for (DEBUG) Cell Overwrite Set, when set to button A, are as follows:

The Minish Cap has six unused enemies, four of which are leftovers from Four Swords. They can be spawned with this GameShark code:

Replace XX with the enemy ID and YY with the parameter ID.

Golden and purple Darknuts exist within the game's code, but their behavior is very glitchy. Their moveset is the same as the black Darknut's.

Zol and Gel from Four Swords still exist in The Minish Cap's code. They can be spawned in blue (YY=00), green (YY=01) and red (YY=02), although there are no differences in behaviour.

In a digging cave in Castor Wilds, there is a hidden word in Japanese on the map: "もぐら", which means "Mole".

With a hex editor, it's possible to find a list of the places and dungeons in the game. At the bottom of this list is "Biggoron's Dungeon". This is probably used as the game's internal name for the Gorons' cave. Indeed, finishing the "quest" of this cave is the only way to see Biggoron.