From The Cutting Room Floor
< The Legend of Zelda: Majora's Mask
Jump to navigation Jump to search

Some of the following unused text is found only in the Japanese version of the game. Unofficial translations provided by GlitterBerri.

The Seahorse isn't given to you in its own bottle in the final game; you need to have an empty one in your possession to get it.

The Hylian Loach also once came in a bottle, it seems.

However, text for a non-bottled version also exists.

This text is used if you buy back your stolen Hero's Shield from the Curiosity Shop, which can't normally happen because Takkuri will never steal it from you.

Usually, upon entering maps in Majora's Mask, a purple bar is displayed with the name of the location. However, there are three exceptions where no text is displayed upon entry at all. Location names exists for these areas only in the Japanese game, but it isn't used in that version, either. Because almost all of MM's maps have location names, it's possible that this was an oversight, but the lack of an English translation is curious and possibly points towards a deliberate decision on the developers' part.

This text is meant to be displayed when you enter the shrine where you get the Lens of Truth at Snowhead. Lone Peak Shrine is mentioned once in the English script, on a sign text: "Lone Peak Shrine ahead. Watch your step! It's a long way down!"

This text is meant to be displayed when you enter the cattle barn at Romani Ranch.

This text is meant to be displayed when you enter the shop at Zora Hall.

This text is present in both the English and Japanese versions of the game. It is attached to a map called Z2_KONPEKI_ENT, used only for the cutscene in which a group of pirates boating in the waters near Great Bay Temple get swept up by a hurricane. However, the map is never otherwise accessible, and nothing suggests that Link was ever intended to be able to explore it. For example, it lacks any exits, and the surface of the water can be walked on.

Tatl has a message like this for Woodfall, Snowhead, and Great Bay in English, but none for Ikana. This is because the message is normally seen after completing a Temple without having completed the one before it, for example if you complete the Snowhead Temple before the Woodfall Temple. As there are no Temples after Stone Tower Temple, this is impossible to see.

The Great Fairy instructs Link in an unused cutscene.

The final developer note contains an error, it should read "Success Message".

One can trigger this message by talking to the Bomber guarding the entrance to the Astral Observatory as Fierce Deity Link in the Japanese version of the game. The Bomber uses other messages for Link's different forms, but as the Fierce Deity Mask cannot be used outside of boss rooms, this one is never seen. The game softlocks after the conversation is finished.

As this message doesn't exist in the international versions of the game, accessing Clock Town as Fierce Deity Link through the use of glitches or codes and talking to the Bomber in question will cause the game to freeze.

This text appears if you pop Jim's balloon in North Clock Tower and then talk to him as Fierce Deity Link in the Japanese version of the game. It does not exist in the international versions, which merely displays a blank text box.

An unused message after racing the Deku Butler. Link's disappointment may refer to the Mask of Scents.

The second line was replaced by the following message in the overseas releases:

In order to see it, one must talk to Kotake as Child Link before meeting Koume, but without having checked the Tourist Information window.

Koume advertises child and adult boat cruise tickets for 10 and 50 rupees, respectively. Buy a child ticket, and she will say "Great. Kids are 10 Rupees!" Buy an adult ticket, and she has the following unused response:

The bean seller gives Link a hint about what to do with his new item. This was removed in the international versions for some reason.

The man in charge of the pictograph contest complains about his customers after telling you that the competition is limited to humans only:

A Goron racer celebrates Darmani's return and the coming of spring. A very similar text is used instead.

While the Zora Shop sells arrows, it doesn't sell bombs. 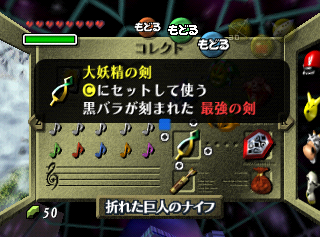 In MM (J) 1.0, players can cause this text to appear by using a GameShark to replace Link's sword on the Quest Status Screen with Fierce Deity Link's sword. The description is similar, but not identical to the regular description of the Great Fairy's Sword. It is different in that the text for the sword's name is yellow instead of red.

This text appears in a cutscene setup for Romani Ranch after 6pm on the Final Day.

The Scarecrow describes how the Song of Inverted Time and Song of Double Time are different from the original Song of Time, but since neither he nor anyone else teaches them to you formally, these two pieces of text are never used.

The Postman contemplates what he should do with his afternoon, as no letters have been sent that day.

Takkuri the bird hangs out in Termina Field beside the road to Romani Ranch. It bumps into you and steals one of your items, then flies off in the direction of Clock Town. Items it is capable of stealing include the Hero's Sword, Great Fairy's Sword, bottles, arrows, and rupees. If you lose an irreplaceable item, it can be bought back from the Curiosity Shop when it opens at night. The Japanese script has text for buying back the Hero's Shield & Mirror's Shield, but Takkuri never steals these shields in the final game.

Text fragments found with the Milk Bar text indicate that Madame Aroma would originally recruit you to search for Kafei there, rather than or in addition to her office.

This dialogue would be used by the Happy Mask Salesman, if it were possible to speak to him while wearing the Giant's Mask. However, Link cannot wear this mask outside of the Twinmold battle arena.

These are messages from Gossip Stones found within the moon trials. There are versions of messages for both before and after obtaining each mask, since it's impossible to reach the moon through normal means without obtaining the Gibdo Mask, the Garo Mask, and the Captain's Hat; the text hinting at their locations is never used. Furthermore, since it's impossible to speak to the Gossip Stones without it, the Mask of Truth message also goes unused.