This is a sub-page of Super Mario Sunshine.

All levels in Super Mario Sunshine have some sort of view of the other areas or islands, but some of the level geometry can't be seen in normal play. 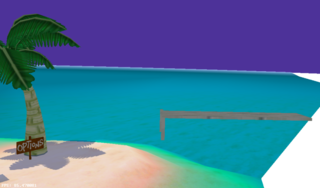 In the scene used for the File Select menu, there is a poorly-textured pier hidden just offscreen. Oddly enough, it has collision, and thus can be walked on. 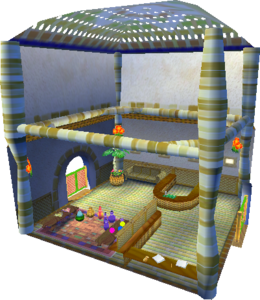 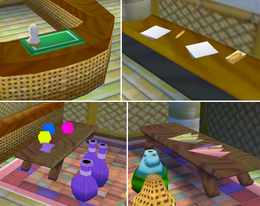 The map for Delfino Airstrip has a copy of the waiting room floating above the map. This in itself isn't unusual, as this is how the game handles separate interior areas in Delfino Plaza, but this particular room goes unused because the waiting room is simply part of the main map. What makes it more interesting is that this room has more details in it than the used version, as well as having different lighting. The added objects include papers and pencils, a passport stamp, and various crafts. 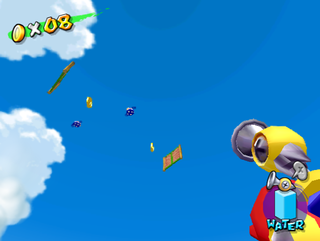 It's only possible to access this room during the second visit to the Airstrip using rocket storage, or turbo storage, however the room appears invisible during the second visit. Only during the first visit to the Airstrip upon starting a new save file will the room appear visible when inside. During the second visit, this room contains a pair of doors, two coins, and a pair of Soarin' Stus that flutter back and forth in a tight path, passing through each other. The doors are linked with the doors in the regular part of the map, so if one pair is destroyed by the Turbo Nozzle, the corresponding doors are also destroyed. During the first visit, this room is empty aside from the doors.

Delfino Plaza's flood scene (dolpic9) has some subtle yet interesting changes, and is also a bit simplified, suggesting this map is based on an earlier version of Delfino Plaza. 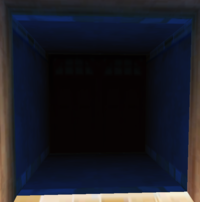 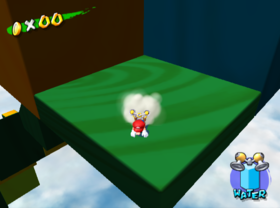 In Delfino Plaza's "secret" slide stage, located under the left hole in the first row is a platform. This platform is the only one of its kind in the level's design. For some odd reason in the Japanese version only, Mario treats it like a slippery surface. To the top left of the platform is an invisible wall that jitters Mario back and forth off the platform if he gets too close. This is most likely a forgotten leftover from an early design of the stage.

Bianco Hills' stage geometry shows off a lot of the other levels in the distance. Interestingly, this is one of the only times where a stage in the game forms an almost complete model of the dolphin-shaped island. There is also a creek that goes on for some way (which is boarded up).

When viewing Ricco Harbor from the start of any episode, the helipad is replaced by girders in a square layout, as seen in pre-release material. 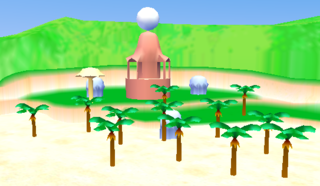 Gelato Beach can partially be seen from Ricco Harbor, however the Sandbird Tower has columns around the walkway which do not appear when actually visiting Gelato Beach as a level. 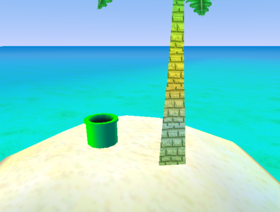 Delfino Plaza can also be seen from Ricco Harbor, but a key difference besides the low-polyness of it all is that the fruit basket island has a pipe modeled on it. The actual island with a pipe is on the other side of Delfino Plaza, and is nowhere close to Ricco Harbor.

Also, the palm tree on the island, as well as the ones visible by Bianco Hills, are using an old style of colored shading seen in pre-release material as well. 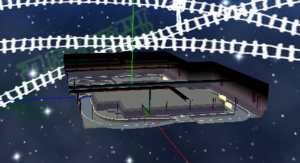 While you never see a sky in the Blooper Surfing Safari, it uses the train track sky box that is used in some secret levels. This is also the case with Corona Mountain.

Gelato Beach kind of has Isle Delfino in a dolphin shape, although it looks more awkward than with Bianco Hills. Delfino Plaza and Sirena Beach/Hotel Delfino are somewhat visible from Gelato Beach, but only southern Delfino Plaza and some of Hotel Delfino's top floor can be seen. Oddly, Pinna Park's beach is modeled, despite the fact that it cannot be seen by normal means. 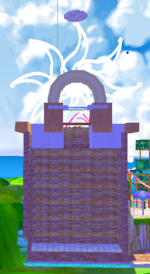 At Pinna Beach, the back of the Ferris wheel is fully modeled, but because of invisible boundaries preventing one from swimming far enough, only part of the backside can be seen. 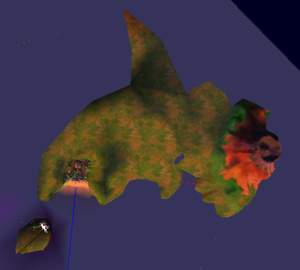 Isle Delfino is once again shaped a bit like a dolphin in-game. The island's model is kind of similar in appearance to the Bianco Hills one.

Unlike other levels, Noki Bay isn't on a dolphin-shaped island at all. Depending on the perspective of where Mario is at in the level, you can see a lot of the hills in the distance to Corona Mountain, or just see a few big hills. However, Corona Mountain itself is fully modeled, including the top with a geyser modeled in. There are other levels that have very similar geometry regarding Corona Mountain, but most are cut somewhere down the base of the model to possibly save resources and reduce load on the hardware. This is the only time in the game where the full model of Corona Mountain is actually used, although it cannot be fully seen.

The waterfall crevasse and the interior of the wall jumping section below the alcove with the ice block are fully textured, but not everything is visible in-game.

There is an infamous hidden book that can never be retrieved in the Red Coins in a Bottle episode. The models are actually parts of the level geometry and not separate objects. 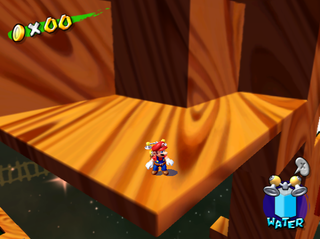 Mario inside the secret room.

Episode 6, "The Shell's Secret", has an unseen part of its geometry. Behind the first block with a brazier you see is a hollowed-out area. It isn't known if this was intentionally left in or was from an early design that was forgotten, but since most players are heading towards the Shine and not moving the camera around to find secrets, this is unseen.

Pianta Village is shown to be in a circular abyss that takes up a large portion of this weird, barely dolphin-shaped island. Additionally, Noki Bay appears as the upper cliffs including the pond at the top of Tricky Ruins, but only a glimpse can be caught during gameplay. 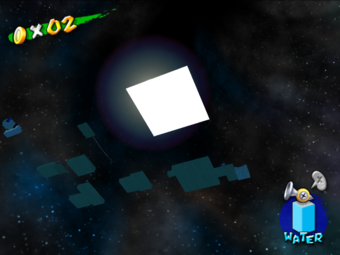 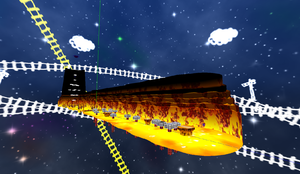 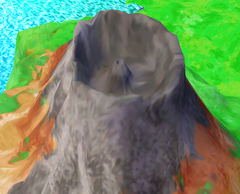