The NES Super Mario World is probably the most accurate unlicensed port of the SNES original out there. Sure, it only has 28 levels to the original's 78 (with the Switch Palaces and secret worlds not being represented at all) and doesn't have (for example) Banzai Bill, but it ports over a lot of stuff pretty faithfully.

Probably the only real detriments are the poorly-redone music and the somewhat-lackluster controls, although there are Game Genie codes to fix the jumping physics.

It's also notable for having a fully-functional Yoshi, something Nintendo said was impossible to do on NES hardware. Oops.

Super Mario and Fire Mario have several sprites that go unused. They even have Luigi variants. Some things to note:

Mario with a halo, used in the original game's continue screen. This port has no option to continue after getting a Game Over.

Animated graphics for Muncher. The ones that appear in-game only have one frame and act as a background hazard. These look like they could be used as sprites.

Lakitu and Spiny, which could have appeared in Forest of Illusion 4 (Chocolate Island 1 in this port). No graphics exist for a cloud that Mario could ride in, however.

Although horizontal Podoboos are used in-game, they use a different style and are not animated.

Bullet Bills were planned as well.

A digging Chargin' Chuck, which is strange since they only appeared in one level of the original: Valley of Bowser 4, which did not get ported over.

A sprite for a clapping Chargin' Chuck.

Fishbone's graphics. Similar to the digging Chargin' Chuck, the areas where Fishbone was encountered in the original are not in this port.

Flattened sprites exist for Koopas and Rexes, but aren't seen in-game. This is especially odd given that Dino-Torches do use their flattened sprite.

The graphic used to denote cave levels in the original game. While two cave levels are in this port, they instead use the same world map graphics as normal levels.

A tiny Boo. In the original game, this appeared over Ghost Houses on the overworld map.

A tile for the Star Road warps from the original game. There are no other elements related to Star Road in this port.

Background variants of the wooden spikes. The used version is a sprite and has a slightly different design.

The giant crusher, meant for castle levels. It has no collision and is replaced by Thwomps in this port.

An animation for the Flip Block, which goes unused as you can't flip blocks in this port. There is in fact an unused spinning Flip Block tile that uses this animation, but it simply acts as a normal solid block. Interestingly, this tile does appear in Roy's Castle in the incomplete version! (It's replaced with the used stationary Flip Block in the complete version.)

Eggshell pieces. Similar graphics were used in the original when Yoshi hatches out of an egg.

Peach reaching the ground and opening her eyes after falling out of the Koopa Clown Car, which is not used here. 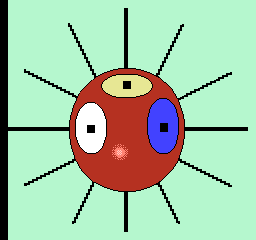 In any level, pause and press Up, Right, A, Down, Right, B, Up, Left to trigger a hidden JY logo screen, using the standard full-screen logo found in most JY-published games. The only way out is to reset.

This code also works in the incomplete version, but parts of the logo appear smashed up.