From The Cutting Room Floor
< Super Smash Bros.
Jump to navigation Jump to search
This page is a translated version of the page Super Smash Bros./Debug Menus and the translation is 15% complete.
Other languages:
English • ‎русский • ‎한국어

This is a sub-page of Super Smash Bros./Debug Menus. 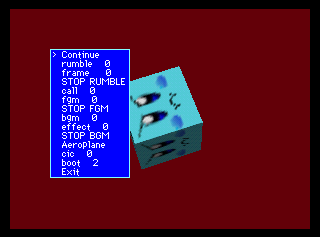 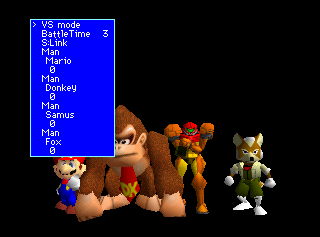 The battle debug lets you set up a timed battle on any stage, with any character. Pressing B hides the menu and pressing Start while the menu is hidden brings it back.

Pressing C-Up or C-Down on the other hand reveals a hidden feature of this menu: It also serves as an animation viewer! Each press of the buttons causes the second character (which defaults to Donkey Kong when the menu is booted up) to cycle through a rather comprehensive selection of animations, covering not only their attacks and "hurt" animations, but also their character intros, taunts, T-poses, various walking/dashing speeds, latching on to an edge, animations associated with items (complete with a few visual effects), recovering from being knocked down, "dazed" animations and even a few still frames of certain actions! There are a large amount of duplicates spliced in with these animations, and a few cause the proportions of the character model to mess up. Defeat, victory and "continue" animations are strangely missing from this collection. C-Up brings the next animation, and C-Down brings the previous animation.

The remaining rows are for player settings, and each contains two sub-rows. The fourth, seventh, tenth and thirteen row changes the type of player for the first, second, third and fourth player respectively:

The first sub-row changes what character the player is using. Mario, Donkey Kong, Samus, and Fox will be selected by default as Player 1, Player 2, Player 3, and Player 4 respectively. The character chosen as Player 1 will appear in the left of the debug menu screen's background, and the characters chosen as Player 2, Player 3 and Player 4 to the right side of the previous player. Additionally, some characters that are not normally playable can be selected. These characters' names are written in italics and ones that freezes the game when the option "Congra" is used when it is Player 1 are written in bold in the chart below. Intriguingly, the map used as the background in 1P Mode's "VS" screen actually includes many of the debug names seen below, although the low quality makes it difficult for players to make out.

The second sub-row lets you change a fighter's costume. Two normally un-selectable costumes for Yoshi used only in 1P Game can be selected, including Team Mode exclusives. Master Hand, Metal Mario, and Fighting Polygon Team members do not have any alternate costume.

Pressing Start while the menu is set on VS mode leads to a menu with two options: the first one being "Exit", and the second being a stage selector.

Use Left and Right on the Control Stick to select a stage, and press Start to begin the match. Stages with names in italics are unique to 1P Game and can't be selected on the VS Mode stage selection screen, and bolded stages are ones which can't be accessed in-game without either using this menu or other miscellaneous codes. 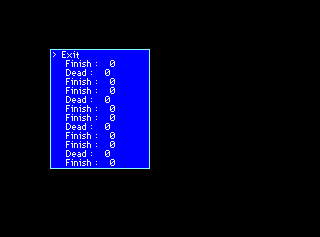 A deceptively simple menu laid out in almost the same fashion as the stage selector in the battle debug. There are 2 commands labelled as "Finish" and "Dead", although the former of these is actually labelled twice per player slot and corresponds to two different commands. The listings suggest the menu was used to assign KO and Self-Destruct counts to each character, or perhaps to test the point system itself. This menu in particular is also very unstable, and usually tends to crash the game simply by being loaded up.

Strangely, the menu cannot be exited from via pressing Start unlike other menus, though pressing A will take you to the battle debug. Even more curiously, when you are warped to the battle debug, none of the changes made on this menu appear to apply.

This debug menu differs considerably from the previous 3 in that it has no obvious purpose and offers far less interaction. It contains two large rectangular columns which can be shifted to the right off-screen (which reveals a considerably bugged font in which only Pikachu's name is decipherable) or to the left in an infinite loop, but what is perhaps more interesting is the fact that the menu recognizes button commands! Pressing any of the D-Pad directions or any of the buttons (except for Z which forces a controller input test to appear on-screen) causes small yellow squares to appear on screen, in differing positions dependent on which button you press. This is the extent of this debug's interactivity, and just like the Falls Debug, what you do appears to have no bearing whatsoever on any of the gameplay functions. It may have been utilized very early on in development to test basic controller functions, but it is difficult to deduce any sort of purpose for the menu given its lack of interactivity.

However, unlike the other debug menus, this one notably differs visually depending on the version of the game: