The only entry in the Formation Soccer series to see a release outside of Japan. 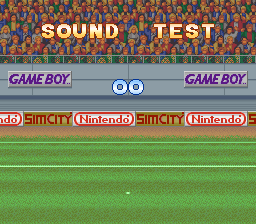 Press Right+Y+Select at the title screen (it might take a few tries).

The copyright screen was changed to account for Nintendo publishing the game outside of Japan, as well as the later release year.

The text that appears at the beginning of the intro was changed.

The title logo and copyright info were changed, and Human Cup was changed to Tournament.

The graphic of the trophy changed, and Mode Select was reversed to Select Mode.

At the team select screen in a 2 player game, hold Start and press B to access a hidden team. This team is named after Human Entertainment in the Japanese version, and named after Nintendo elsewhere.

The ads around the field are for Nintendo, the Game Boy, and (interestingly enough) SimCity in the International versions, while they're for Human Entertainment in the Japanese version.