The game that inspired an entire generation of city planners, utility plant supervisors, and other thankless bureaucrats. 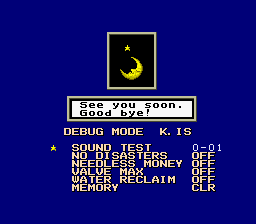 Press Up or Down to scroll through the options, and press Left or Right to toggle them on or off. To activate the selected features, change MEMORY to SET and reset the SNES (they will remain active even if you power off). To deactivate everything, go back into the menu, change MEMORY to CLR, and press B.

The "K. IS" indicates that it is from staff member Kazuyuki Ishihama.

The debug functions are as follows:

In the compressed graphics at offset 0x0460EB in the French version are two copies of "Please Wait...". The first one is used, while the other (in a different style of font) isn't.

The police are indicated by "Pol" in the French version, as “PD” is an offensive French slang term for a gay man.

The Japanese and European versions play this slightly gloomy-sounding track upon opening the Budget screen. The US version continues to play the city's current background music, though the track is still present in the ROM. It's unknown why this was changed.

The game features a 1-hour time limit and a calm jazz soundtrack. The game has no artificial disasters. Thermal power generation was abolished, and instead adds "文" marked school. "文" (Bun) is actually the map icon of a school in Japan.

A dump of the third broadcast version was eventually found and released in June 2019.

This game contains these maps and scenarios:

Bern and Detroit were the same scenarios as in the standard version.

Aside from Dr. Wright, three new advisers were added: Madame Marie, Roy, and Yoshio Kanetake. Kanetake specifically was an employee of Peach Bank.

The control panel has 3 icons:

As with many Satellaview games, the advisors in BS SimCity were voiced.

These images seem to be some of the only ones available of the game, although they are at a very poor resolution.