The Sims 2 is, as you may have guessed, the sequel to The Sims. And it still sold massively well.

It's worth noting that most all textures in the game have a duplicate at half the resolution, the versions uploaded here are the original full resolution versions.

Interestingly a number of graphics and textures were found in the Sound folder of all places, presumably from early on in development.

It's worth noting that some early or unused strings exist, untranslated in non-English languages.

Also found untranslated in non-English languages over the used strings. Differences mainly boil down to minor changes in wording and punctuation.

When loading up premade families, the player is usually given prompts in a scripted sequence designed to teach the player about different gameplay elements, such as birthdays, marriage, alien abduction, and more!

Ordering slightly changed from internal order to be grouped by family and neighborhood for purposes of clarity.

Power is a scrapped Aspiration that is a combination of Fortune and Popularity, which can be loaded into the game through the use of debugging cheats (specifically 'testingcheatsenabled' and spawning an object known as the "Sim Modder"). However due to its unfinished nature it doesn't display an icon in-game (despite one existing,) borrows text from other aspirations, and leaves any sim that ages up with a bad memory of growing up despite how high their aspiration meter is.

It was replaced by the Grow Up Aspiration late in development, due to hidden data from dead relatives using it.

The game features a variety of hairstyles that exist in the game's files and are fully functioning, but are otherwise inaccessible to the player through normal means. The main way of accessing these hairstyles is through the use of debugging cheats (see below) in Create A Family.

While still technically accessible, it is otherwise unavailable outside of selecting a specific premade sim in Create A Family. Also worth mentioning is that this hair bears a striking resemblance to a hairstyle that is accessible without the use of debugging cheats.

Like the braids above, it is still technically accessible but the only way to really do so is to give a toddler the "puhairsimple" hairstyle (the short one with bings) and age them up to a child. Worth mentioning is that this hair also bears a striking resemblance to a hairstyle that is accessible without the use of debugging cheats.

Unlike the previous two this one is wholly inaccessible outside of the use of debugging cheats.

This hairstyle is technically accessible, but also inaccessible. It is otherwise inaccessible outside of debugging cheats, but the premade sim, Romeo Monty, in Veronaville comes with this hairstyle by default.

Images of Brigit the Maid, a character from the first Sims game, are present in the files of some of the default Maid NPCs.

Several references can be found for radio stations that do not appear in the game:

There are community lot wall speakers for Bluegrass and Jazz in Objects/Objects.package. The Bluegrass speaker is actually the R&B one and the Jazz one is actually for Pop, suggesting that the stations were replaced during development (Jazz was later added with the University expansion, though curiously lacking any wall speaker).

The Classical station was cut, but brought back in the Nightlife expansion (with its original index number too). There is a mesh and texture for its own wall-mounted speaker in the files for the base game sporting a unique look from the other wall-mounted speakers (see above).

Introduced in The Sims 2: Seasons Expansion Pack, ideal plantsim (sic) is a hidden Sim whose only purpose in the game is to provide genetics towards all PlantSims born via the 'Spawn PlantBaby' option, technically making him the father of all PlantSim children (despite not appearing on their family trees). 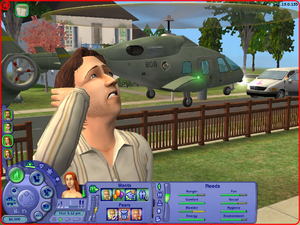 Unlike ideal, Big Boss cannot be added to the household and was removed from the final game, although his icons and a good amount of the files relating to his scenario still exist within the game. His scenario would have played a lot like the "Invite Headmaster" scenario, except the schmoozing part was not needed to win the scenario. The Big Boss and his scenario were most likely scrapped in favor of Chance Cards. Though he technically went unused, there is a Boss NPC which will generate if your Sim calls in sick.

He would've arrived via helicopter at 5 PM, much like how the Headmaster arrives in a normal car at the same time. For some reason, if you summon the NPC through mods, he appears as a female Sim with a male voice, or vice versa.

Within the files of the game are a lot of removed features from the game. Some were re-introduced in later expansions.

intProp censorgridsize, a cheat which removed the mosaic blur that appears on Sims while they take a bath or shower, was removed from the game starting in The Sims 2: University Expansion pack. It was revealed by EA that the cheat had been removed due to the game being accused of having in-depth sexual content, despite sims having the anatomical detail of a Barbie doll.