The Sims is nothing but the Game of Life, and somehow managed to become one of the best selling PC games of all time.

Found in Objects.FAR. Although they can no longer be seen as part of the original objects they were initially meant to be a sprite of, the sole presence of the sprites suggest plenty of scrapped behaviors and some primitive aesthetics from earlier versions of the game.

Naturally, stored within Sprites.IFF as .BIN files, unveil a fair deal of subjects and feelings that didn't see the light of the final version's day.

There are some unused graphics in UIGraphics.far, which contains the game's UI images and other content. 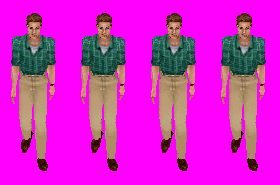 An image called Nbhd\DesignCharSkinsBtn.bmp. What's interesting is that this image shows a sim in an outfit not available in the final game. However, It is present and used for the The Sims Steering Committee pre-release build of the game two years before the game officially came out.

Listed under the names Nbhd\DesignFamCancel.bmp and Nbhd\DesignFamDone.bmp. Both of these images seem to be placeholder buttons for the family creation screen. The buttons used in-game are empty, with text rendered over the button graphic.

An image called Nbhd\Marquee.bmp. It is unknown what this could be used for. However, Marquees are also used with signs, so it could have been for the credits sign at one point. 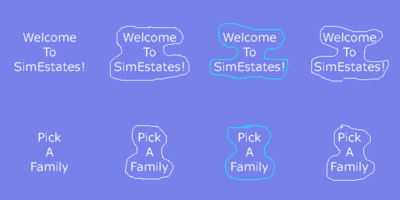 This image is simply called Nbhd\SimEstates.bmp It's unknown what this was intended for either. 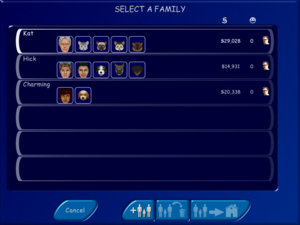 The icon, oddly glitched and appearing.

This icon, called Nbhd\Smiley.bmp, is most likely a placeholder for the Friend Count icon where the budget is, since the final game has a file with this same name and a smiley face. It's unknown who the person is in the picture, maybe a developer. 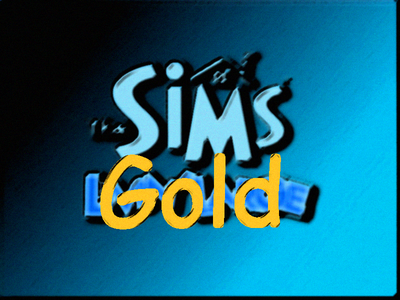 Only present in the Deluxe Edition and later expansions and bundles is a setup placeholder under the name Other\setup_placeholder.bmp. The "Gold" subtitle can be assumed to be an early name for the Deluxe Edition. If one checks the credits for The Sims Vacation/On Holiday, The Sims Gold is mentioned.

This unused graphic labeled cpanel\CatalogUnknown.bmp was most likely a placeholder for objects in the buy menu with no icon. Later revisions of the game engine automatically generate the buy thumbnails from the sprite resources when they aren't explicitly defined in the object data. This means most players have never and will never see this in the buy catalog, although it can be seen in later versions of the game if an invention object's thumbnail can not be loaded.

This cpanel\People\UnknownRel.bmp file only gets used if a sim's portrait is missing or can't be loaded in the Relationship panel or in a speech bubble when one sim speaks about another. Some NPCs have this in their stored data, unused. The game will generate a thumbnail if it is missing so most players should not encounter this graphic. This can be seen if a thumbnail can not be generated or if a thumbnail is corrupt on generation which can happen with malformed skin files.

cpanel\People\UnknownThumbnail.bmp's purpose is pretty obvious, but this is never used. In earlier game versions a thumbnail of this size was generated but went unused. Later game revisions stopped generating this thumbnail under most circumstances.

cpanel\Buttons\UnknownFace.bmp is only used if a sim's portrait doesn't exist or can't be loaded. What's interesting that unlike the other 'Unknown' images, this one's a clickable button, which means it's used in Live Mode. Another fact is that there's emotions on the lady's face, neutral, happy, and sad, which corresponds with the sim's mood. In the final release, the plumbob shows the mood of the sim.

cpanel\Build\popuproofpattern.bmp was meant for the pop-up when choosing the roof pattern, much like the one for the roof pitch.

An old check button, which appears to may have been used in a debugging menu and/or the options menu.

A sheet for testing the button effects. 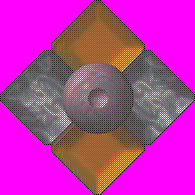 PieBack.png, this was most likely a very early background design for the pie menu.

An unused cursor for the Downtown loading screen exists in the game's files which appears more cartoony, and doesn't have shading unlike the final design. What's interesting is that the final cursors for Hot Date and Vacation/On Holiday are already included in the Deluxe Edition even if the player has not installed either expansion pack yet.

The game can handle 100 lots, House00.iff through House99.iff. However, some lots are not used by the game in any game version. Below is a list of lot numbers (HouseXX.iff) that are unused and have something special about them. If any other unused lot is loaded, the game will simply try to treat it as a residential "Sim Lane" lot. However, the game engine will correctly pull a lot zone from Neighborhood.iff if one is added.

Files for House00 and House11 do exist in the game but are unused. Files for all other unused lot numbers are absent.

Lots 12 through 20 and 31 through 39 are not defined anywhere and load as described above.

Although the game can be forced to load the lots, the game simply generates an entirely blank lot for them since there is no default data available in the game files. This "default" generated lot is simply a 60x60 square with the default green grass. However, the lot generation code does include all "global" objects including the lot controller objects which means they do function correctly, to a point. The vacation lots have a Vacation Director Lana walking around, functioning properly but no payphone objects to get home.

Some Base Game NPCs are named in a format such as job_fafitmed suggesting that multiple firefighters, maids and mail carriers were planned to be generated live. Hot Date does feature multiple variants of cashiers and restaurant staff which will spawn if the same objects are used more than once on the same lot.

The SimAntics engines which handles the object's code has some features which are not referred to by any Maxis objects as of the final game edition. Most things have straightforward names and most even function properly.

Putting these together because the OBJf is basically an extension of the OBJD. And if we keep putting an extension on the previous extension, the table will be a big circle. Many OBJD entries are unused in favor of the OBJf (and, indeed internal notes discourage using the OBJD in place of the OBJf). If no OBJf is associated with an object, the game will use the OBJD values. Some of the earliest made objects were never updated to have an OBJf. For this reason, the technically-unused-but-exists-as-a-functional-fallback OBJD entries won't be included. Most aren't even interesting.

Some objects have strings and leftover scripting that suggest that other things may have been planned.

A note regarding NPCs is that the Repo Man seemed to be a favorite NPC to clone other maxis NPCs from and his strings are often leftover in other NPCs. Amusingly enough this includes the Grim Reaper introduced in Livin' Large.

All stoves (even ones introduced in later expansions!) contain strings for a help system related to fires. None of these are translated and the notes even indicate that the feature was cut.

Sims can start fires when they use a stove and have a low cooking skill. Warning: Cook Object is going to burn. Do you want to allow this?

There is a duplicate "I'm not in the mood to work" string. ID 3 is unused while ID 14 is used. While not every language translated the duplicate ID 3 string, Danish, Norwegian and Finnish did and interestingly enough have different translations for ID 3 and the used ID 14 string. All three of those languages were (officially) added int he Unleashed expansion, meaning this translation was possibly retro-fitted.

Contains a string (ID 30) for when the sim is currently working on a crystal ball "riddle". However the object never references this string. It is translated into other languages.

You are already solving a crystal ball riddle.

Translation notes indicate that the sim would receive the riddle then have to check in with the crystal ball the next day after completing the task. However the way the scenario works in the final game the sim is told by the tracker object when they finish a riddle without any sim interaction. If the sim does gaze into the ball again they will be reminded of the riddle.

This dialog appears when the user is in the middle of solving a riddle and gazes into the crystal ball.

An alternate line (ID 1) for when your sim does not have enough money to pay for their food. The game explicitly calls the used string at Index 0. While this is translated it is likely just an oversight since the tree that manages the eating controller is hectic enough. It is possible that the used string was intended for the "classy" restaurant and the unused one was intended for for the "diner". Regardless this is unused.

Nobody gets a free lunch. No §§, no grub. Sims need full bank accounts if they want to stuff themselves downtown.

Apparently, at one point all of downtown was supposed to close at 2AM. The controller does not check the time or ever display the following messages in case you're wondering they are translated.

All right people, you know the drill. This town has a strict 2 AM curfew and don't pretend like you don't know. Move it!

Don't you people ever sleep? Perhaps you just moved here, so I'll go light this time. Downtown closes at 2 AM. Now let's move, nothing to see down here, go home now.

Apparently at one point the restaurants were intended to close. The strings are translated but there is no call to them in the podium object or any code which seems to reference the time or any attribute (which could be set by the downtown controller object) to see if the restaurant is closing.

Dear patrons. The restaurant is now closed. Thank you, and good evening.

Dear patrons: the restaurant will be closing soon. Please enjoy the remainder of your evening. Thank you.

UIText.iff contains many strings which are used and naturally some that aren't (funny how that works, eh?).

Additionally, a few unused strings are in EvictModeStrs.

The Hotkeys are defined in UIText.iff resource 161 - presumably so they could be changed by the localization teams easily.

There is an unused registry entry called "BetaSite" with a REG_DWORD value of 0x00000001 (1). What it does is unknown and changing the DWORD doesn't appear to do anything visually, so it's completely unknown what it's meant to be for.

In the game, 27 cheats can be used (which slightly differ depending on the expansion pack), but there are more implemented and even help texts in the binary, but the help command cannot be used, because the help cheat is not in the list of allowed cheats as well.

Fat cheat names are used in the base game, but the help text is not used.

This intro video plays prior to the start of the base game, all the way up to the Superstar expansion. Some expansions or editions feature slight variations of this video, and upon installing certain expansions, some remove the video entirely. The video notably features items that were never in the final game.