SimAnt is a game about Sims and ants. 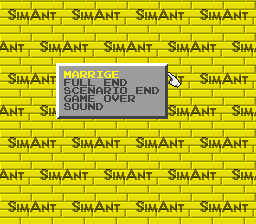 Plug a SNES mouse into port 2. While holding down both mouse buttons, press L+R+Start at the title screen to access a small debug menu which allows you to view a few cutscenes and access the sound test.

A more convenient way to access it is to use the Pro Action Replay (PAR) code 80946D07. 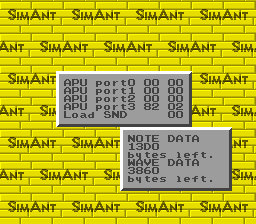 The sound test is rather low-level and allows you to write values directly to the four SPC communication ports. The Load SND option selects a sound/music bank to load.

To play a song or sound effect, send a value of 02 or higher to any port. To stop playing music, send 00 or 01 to the same port.

Each song and sound effect actually takes up two values (for example, the first song uses both 02 and 03.) The same value cannot be sent to the same port multiple times in a row; to restart a song or to repeatedly play the same sound effect, just alternate between the two consecutive values.

The menu icons were recolored and given some additional shading in the US version.

Leftover animation frames for a sumo wrestler from Wakataka Oozumou: Yume no Kyoudai Taiketsu, another game developed by Tomcat System, exist in the US final release, but are absent from the US prototype and Japan release. The colors shown here are just educated guesses.