Shown in this video, there seems to be an external shield activated via hacking. It's unknown if this actually has an effect in the game or if the player simply added an invincibility cheat, but it seems to at least be part of an unused shield power-up similar to the one in the SNES game. LinkTheLefty 12:45, 12 July 2012 (EDT)

Interesting! It's like a blue version of the shields used by Bolse Fighters. Notice how it even protects the wings from breaking off. It's either a really comprehensive invincibility code, or that's actually how it works. Considering the Bolse Fighters were completely protected with it, I'm not surprised. I'm also not surprised it was cut. --Peardian 13:14, 12 July 2012 (EDT)

I've had some information about this on my HDD for awhile and thought someone could go hunting for some possible unused enemies and powerups with these codes (maybe that shield pickup is in the game still?).

The above address for version 1.0 of the game will take you to the level data, including enemies. From the start of the level, you can always find the enemy / object you wish to edit. The first enemy in the map is always 0x08 bytes always from the start. For instance once the level is started you will get 8023D194 as Corneria's data pointer from that address above. I haven't tested this on other levels besides Corneria, but I think the enemy / object list changes from each area. You would probably have to make a list for each level. Below is a incomplete list for Corneria objects.

This replaces one of the enemies that comes from the top of the screen in the first few seconds of Corneria.

IIRC there was a patch for the Wii VC port of this game, I don't really remember any other VC game doing this.

The voice Sample "Great! Now let's get back to the game!" IS played in-game, as seen here:

Additionally, the line "It's all coming down to this" is definitely used as well. It's the voice clip played after Fox says "I'll go it alone from here" if all of your teammates were shot down before that point. --BattyBovine (talk) 14:52, 3 May 2019 (EDT)

That line I don't recognise, but unfortunately I'm also not that knowledgeable about the game. I just happen to remember that one line from when I was a kid, and thinking it was cool that they accounted for your team being out of action. There are a lot of lines on this page that I thought I also recognised though, so maybe over the next week I'll play through the game again and see if I can confirm whether they're used anywhere, and try to find the ones in that ZIP file as well. --BattyBovine (talk) 03:30, 4 May 2019 (EDT)

Thanks, that would be great. It's been a long time since I've played the game more casually myself. Here's a page on most of the SF64 script people say in the game which should be of use as well. There might have been one I missed. That page also doesn't account for all voiced lines either. --Punk7890 (talk) 05:35, 4 May 2019 (EDT)

I am not sure, if some of them are really unused. When playing in All-Range Mode, if you stay close to a team member for some time, they may say something. Interestingly, Corneria, Fortuna, Katina and Venom 2 all have All-Range flight sections. Katina is a special case, as it features Bill, which helps by dropping supplies in a later map. Also, there are a few maps, where you can go left or right. Combined with the "near member"-talk, they may be actually used, but difficult to achieve. However, the voice lines broken down into 2 files may really go unused, unless one-take transmissions is the rule. EXcentriX (talk) 16:01, 13 May 2020 (UTC)

Unused health HUD element, ring that I don't recall from game (at least not it shrinking on you), and boost meter looks different from documented meters (could be VHS rip quality)

I'd like to document what looks like a health HUD element in the bottom left of video and time stamp related (https://youtu.be/sPysl3tfS4o?list=FLQKRUo_G5ifxoMjMEyFipww&t=805), but I'm not sure what the best way to do that is. I also believe that at 13:27 when flying through that particular ring, it should not shrink in on the player - may also not appear elsewhere in game. If anyone with experience documenting the game could verify or place the map HUD in the article, it would be appreciated. Also, it appears that Meteo Crusher had a different appearance, but it could be due to the VHS quality 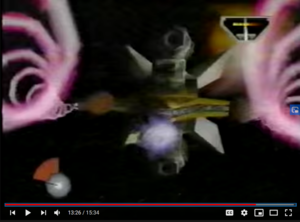 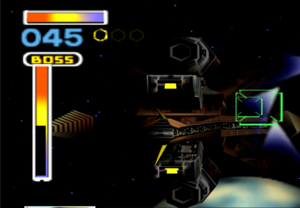