From The Cutting Room Floor
< Template:FeaturedFile‎ | 04-12
Jump to navigation Jump to search 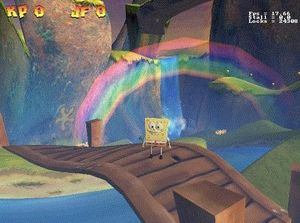 SpongeBob SquarePants: Revenge of the Flying Dutchman was developed by BigSky Interactive, which spun off from Kalisto's USA branch. The development struggled due to being worked on alongside a Jimmy Neutron game and developing with a engine that was difficult to work with. The latter was caused by Kalisto's French branch being the sole developer of the engine, only implementing changes when BigSky requested them. After the completion of the game, BigSky shut down due to being unable to find further work within the video game industry as a result of sabotage from THQ.

Pictured is an image from an early demo of the game, containing SpongeBob roaming around Jellyfish Fields.