The 3-D Battles of World Runner

The 3-D Battles of World Runner (otherwise known as 3-D World Runner) is one of those Square games that wasn't an RPG.

The string "THIS IS A TEST" can be found in the non-parallax area of the game's background tilemap in ROM. This is actually copied to VRAM along with the floor and status bar, but is overwritten with the normal stage background before it can be seen. 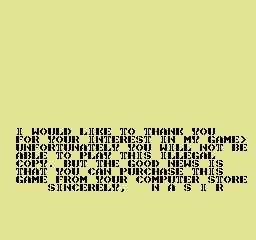 Unlike the similar copy protection features of Final Fantasy, removing Nasir's name from the in-game demo will not make the game crash. Instead, a simple copy-protection trick is used. The FDS version's file system contains two main executable files – the first is just a small piece of code that displays the message at left, and then goes into an infinite loop, while the second is the main executable and is hidden. Because the latter's index is higher than the disk system area value (which represents the maximum number of files on the disk), it appears to be "missing" from the file system. Any program or device which enumerates the files on the disk based only on the system area value (including the FDS bios) will skip this file and never look for it.

As such, most game copiers will load only the small executable, and most who try to copy the disk will see the message after pressing Start on the title screen, and then switch the disk to Side B.

With regard to normal operation, if the game has been copied properly (or the user has a genuine copy), the small executable will be rewritten with the larger one; the smaller file will not even appear in memory.

Game Genie code AAEAGENY (Japanese cartridge) or NYEAGAAE (US) will re-enable the 3D mode select switch. To change the default 3D-mode for each version, hold B then press Start at the title screen. The default 3D mode for the US version is red/green-colored frames (like the FDS version), while the default for the Japanese version is uncolored frames. 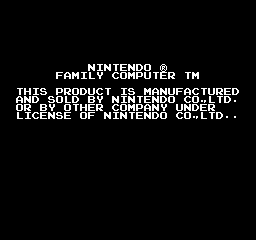 Bizarrely, the standard Famicom Disk System game startup disclaimer is present in the US and Japanese cartridge versions. In the US version, it can be re-enabled with the Game Genie code OZEAAAAV (or replace the byte at ROM address 0x4010 with A9), but for the Japanese cartridge it requires more patching: at ROM address 0x4015, replace the bytes 20 80 80 60 with A9 81 85 01, and at 0x40C8, replace 00 with 0A. (This last byte tells the NES to keep the screen disabled even after the graphics, nametable data, and palettes are uploaded, so it seems NASIR really didn't want anyone to see this screen.)