The Binding of Isaac: Rebirth (Windows)/Repentance

From The Cutting Room Floor
< The Binding of Isaac: Rebirth (Windows)
Jump to navigation Jump to search

This is a sub-page of The Binding of Isaac: Rebirth (Windows).

Re-reversing the "mirror world" BGM reveals that it's actually a completely different arrangement of the music, with more ethereal tones and lighter instrumentation.

This is a layer for the Home track. The stage doesn't actually call for this track at all, so even if enough enemies are spawned to trigger a layer, it won't play. Oddly enough, bits and pieces of this appear in the official soundtrack version of this track. 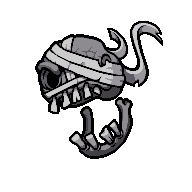 Raglich is a boss that appears to be a member of the Rag Man lineage. It does not appear in any rooms, meaning it can only be spawned with the debug console. Its portrait does not have a shadow, which implies it was cut before the revised Vs. screen was implemented. Raglich has three phases and a rather barebones attack pattern:

At 33% health, Raglich will summon a pair of giant arms from below that rip out three columns of tiles on both sides of the arena, leaving only a small area to move. If Isaac lacks flight and is standing on a tile as is being removed, he will fall into the pit, take damage, and respawn after a few seconds, much like stepping on a Pitfall. Raglich then resumes his previous attack pattern.

Do note that these enemies have a very small chance of being spawned by one of the glitchy randomized items produced by the TMTRAINER item. However, they are considered unused for the sake of this wiki.

Corpse Eater and Carrion Rider were enemies in Antibirth, which could appear in the Mausoleum and the Corpse. They wandered around the room, charging randomly and eating other monsters. Their behavior in Repentance is clearly unfinished, as they behave identically to Grub in every way (even spawning the same enemies on death) and their animations do not function correctly in-game.

Rag Creep is an enemy summoned exclusively by the unused boss Raglich. It fires four homing shots in a straight line.

Split Rage Creep is new to Repentance. It fires two Brimstone beams at 30° angles, leaving a small blind spot in the middle.

Blind Bat was another enemy in Antibirth, which could appear in the Caves, Mines, Depths, Necropolis, and the Cathedral. It hung from the ceiling, waiting until Isaac passed under it to strike. In Repentance, it has no behavior other than dealing contact damage, instead sliding around the room when hit like the unused Skinless Hush boss. As a result, it never changes from the first frame of its animation of hanging from the ceiling.

While Exorcists do appear in Repentance during The Heretic's summoning ritual, they do not appear as standalone enemies like they did in Antibirth, where they could appear elsewhere in the Mausoleum. Despite this, Exorcists seem to be fully functional and even have updated sprites, though their behavior is very different from Antibirth:

Interestingly, while Exorcists are not normally used, they do appear in the game's bestiary and in unused Greed Mode enemy waves. This implies that the enemy was cut late in development.

Strifer was yet another enemy in Antibirth, which could appear in the Mausoleum, strafing back and forth while shooting lines of four bullets. This enemy also has no behavior in Repentance. If spawned, only its lower body will appear properly.

Nightwatch was an invincible enemy in Antibirth, which could appear in the Mausoleum, patrolling the area. If they spotted Isaac, they would summon reinforcements to attack. This enemy has no behavior in Repentance, and can be damaged like normal.

Canary and Foreigner were intended for the Mines, as indicated by their body sprite. Given the "x" in their filename, they were planned for the unreleased Antibirth update. Once again, these enemies have no behaviour.

Vessel was, once again, an enemy in Antibirth, which could appear in the Corpse. It wandered around the room, occasionally spawning Small Maggots and creating green creep. In Repentance, it has no behavior.

The following enemies only consist of sprites and/or last will portraits - they aren't coded as entities, and thus can't be spawned in-game.

Curse of the Giant

Curse of the Giant was a curse introduced in Antibirth, which would force all regular rooms on the floor to be large rooms by combining multiple smaller rooms together. This curse exists in Repentance and is fully functional, but can only be accessed with the curse command. It may have been cut due to its unstable nature—some room combinations can result in strange layouts, broken puzzles, unfair enemy combinations, and other issues.

Curse of the Mist

Curse of the Mist removes all of Isaac's stat increases and items for the duration of the floor, reverting him to his base stats. This technically isn't actually unused, as the Mom's Shadow area in Mines and Ashpit use this curse to disable Isaac's items, though the name of the curse, nor any icon at all, is shown to the player.

Dogma has two unused attacks, which cannot be reactivated in-game but can be spawned with debug commands.

"Dogma Angel Baby" would have spawned in the middle of Dogma's spin attack in its second phase. They float around aimlessly for a bit, before stopping to charge directly at Isaac and explode at the end of its path. 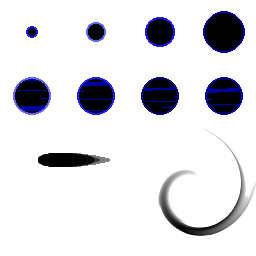 This blackhole sucks in a horde of red projectiles for a short time, before dissipating and leaving a large burst of projectiles that float in the air briefly. Dogma's animations for firing the black hole still exist in the animation file, and some remnants of it can even be reimplemented in-game.

The game files contain a few references to a scrapped alternate floor for the Corpse, called Mortis. There are no graphics associated with Mortis, and there is no stage defined for it in stages.xml.

The game's rooms folder contains Greed Mode layouts for all of the alternate path floors (including Mortis). They can be accessed in-game by using the debug console and using the stage command to change the stage, by appending "c" or "d" to the stage number. These appear to have been scrapped in the middle of being designed—Downpour, Dross, Mines, Ashpit, and Mausoleum are populated with room layouts and enemy waves, but Gehenna, Corpse, and Mortis have no enemy waves; initiating the enemy sequence will only cause empty waves to appear that end immediately. Item rooms work as expected, providing one visible choice and one blind choice. Because these floors are unfinished, there are some oddities and strange occurrences:

This version of Repentance was released across most consoles and regions on November 4th, 2021. It contains numerous differences from the Steam version.

Graphical changes include the following:

Retrieved from "https://tcrf.net/index.php?title=The_Binding_of_Isaac:_Rebirth_(Windows)/Repentance&oldid=1241553"
Categories:
Cleanup > To do
Cleanup > Works In Progress
Games > Games by series > The Binding of Isaac series
Games > Games in development
Subpages