The Binding of Isaac: Rebirth (Windows)

The Binding of Isaac: Rebirth is a remake of the original Binding of Isaac, doubling the amount of content, introducing console players to its special brand of dead baby jokes, bringing in an all-new soundtrack courtesy of Ridiculon, and freeing it from the painful bonds of ActionScript 2.0.

The following message found in a readme warns hackers not to spoil the game for others.

The file that stores information for cutscenes contains "temporary texts" that describe what is happening in most of the cutscenes. However, these are commented out. If you restore them and watch a cutscene in-game, a placeholder screen will appear instead of the cutscene, unless the cutscene itself had no temporary text to begin with. The screen displays a description on a dark gray background that fades to light gray. 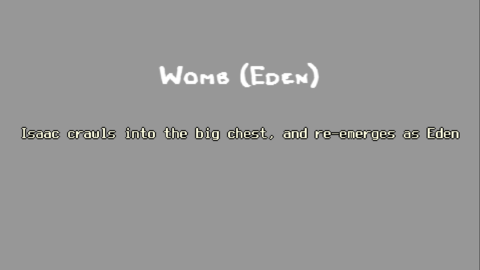 These are rooms that are not associated with any floor, so they will never be encountered. 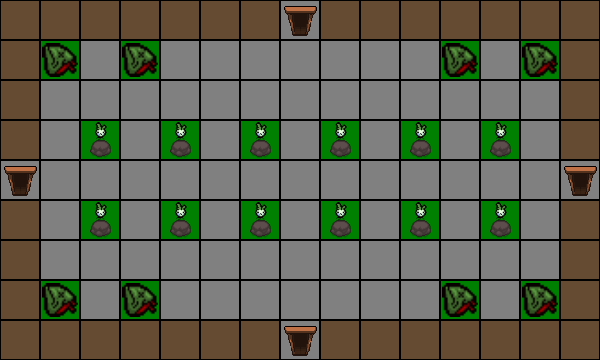 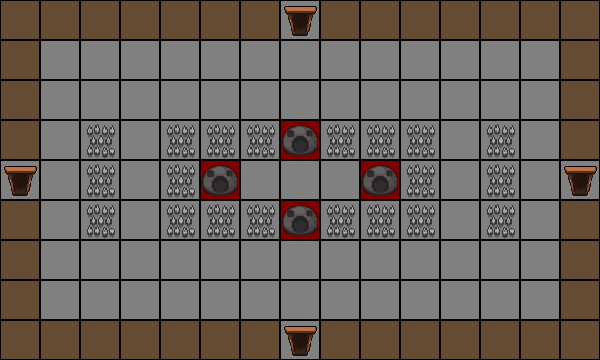 Objects that are placed in a grid-like fashion, such as rocks, are referred to as grid objects. With that being said, there's a lot of unused grid objects.

Most of the floors' rock tilesets have early tinted rock graphics. These conspicuous tinted rocks are very similar to the ones used in the original game.

There are tinted versions of every chapter-specific obstacle, but none of them are used in the game. Interestingly, the icons for The Catacombs and The Necropolis Steam achievements use these. Tinted Skulls were later used in the Repentance DLC, though they look and function differently.

Half Black and Soul Hearts

A half-heart version of the black and soul hearts. Half soul hearts were added in Afterbirth+, but half black hearts are yet to make an appearance.

An unused charge bar variant for a 12 room charge space bar item. This graphic has been present since the original release, but was finally used in the November 13th Afterbirth update for the Mega Blast item.

Placeholder names for the two Angel minibosses—actually named "Uriel" and "Gabriel" in the game's entities2.xml configuration file and in the Bestiary in the Afterbirth+ DLC—for use on the Boss Vs. screen. Since these minibosses spawn immediately by bombing angel statues, they don't get an intro and these names are never used nor needed. 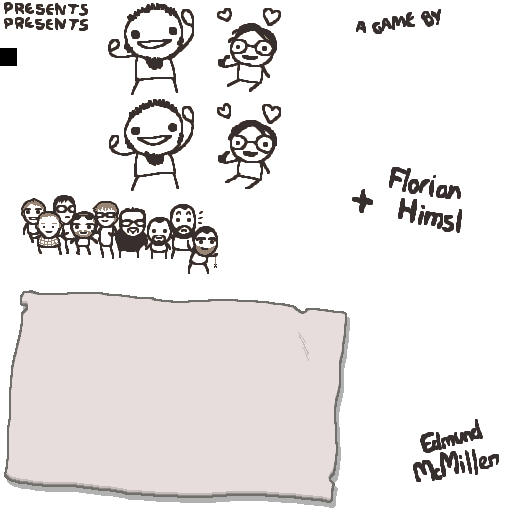 Florian Himsl is still on the intro image, right next to Edmund McMillen, but is never shown in-game.

By enabling the Mouse Cursor mode on the game's "options.ini", it shows the cursor with four arrows (the one on the left). The "classic" Windows cursor is never used.

In The Cage's sprite atlas, there are several unused sprites that actually turn out to be the boss Mega Fatty's vomit-beams, only recolored. Due to the fact that The Cage doesn't necessarily have a head at all, this is possibly the reason why these sprites for one of the boss's attacks are cut out.

As uninteresting as it is, it's still an unused leftover from Gemini. 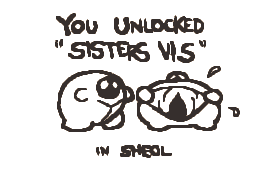 There is an entry for "Sister Vis" within Rebirth's boss name texture file. Sisters Vis also has an unlock screen texture and noted out achievement prerequisites.

The Sisters Vis were finally finished and released in Afterbirth+, but they don't have to be unlocked, don't appear in Sheol, and are called "Sisters Vis" in the boss screen, not "Sister Vis."

This button/pressure plate was officially implemented in the Afterbirth update, but it's been coded and usable since day one.

This early version of the button acts like a test object for the room lock buttons and random spawn buttons in Afterbirth, though what the button spawns is different as well.

If there are any enemies in the room, the button can't be pressed -- this includes the flies that the button spawns. 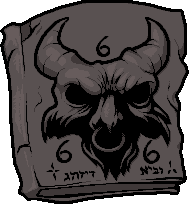 Found on the "giantbook" folder (on-screen animations that are shown when using certain items) contains the book from Book of Belial from the original game. The file name of the image has a different name than the actual name used for the item (in both the original Isaac and Rebirth).

The Flush item originally had an image to appear after using it. 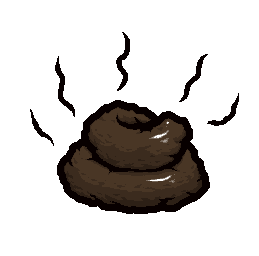 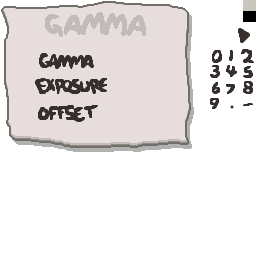 Graphics found on the main menu folder contains a more advanced gamma settings. In-game, you can only change the gamma and that's it, and pressing on the option won't cause the menu to change to another, since it's implemented inside the "Options" menu. It also has its own animation file.

Unused Item on the Collection Page

On the collection page image, the last item seems to be a "Missing Poster", however, the Missing Poster is a trinket item in the game, so this icon is never seen on the Collection table or when the game is paused. Strangely enough, the item isn't found just next of the previous item in the sheet image, it actually breaks a line after the Dog Food (last item seen in-game via the menu).

In-game, when Isaac drops a bomb next to a door, the door will explode and will switch to a different graphics of the door being destroyed (a burst door), letting the player skip the room. However, not all types of doors can be destroyed with bombs. In the game files, almost every single door (except the Devil Room door) has a burst sprite. This is likely a result of the data being copy-pasted (since most of these doors use the coloring scheme of the Basement doors), not matching the special door associated with it.

However, the doors for Curse Rooms, Arcades, and the standard doors in the Chest and Dark Room have graphics for being destroyed, even though none of these are possible to destroy. The Dark Room doors are actually a complete copy-paste of the doors in Sheol, but the game loads door_21_darkroomdoor, not the one from Sheol. Images were cropped to only show the burst part of these sprite sheets.

It seems that originally, the doors for the Dice Room would have had a red-ish color scheme (somewhat similar to the color scheme from the Womb/Utero). This change was probably made to prevent the player from knowing the existence of the room unless they open it with two keys (in-game, both the Vault and Dice Room require two keys to open, and the doors they use look identical). A special door graphic was later given to the Dice Room in Repentance, though it looks significantly different from the one used here.

An unused section for Fistula. It fits between the medium and smallest sections.

A skeletal version of Mega Satan's hand. The hand never spawns in his skeletal form, rendering this unused.

By disabling the invalid seed check and using an invalid seed, you can continue the game after the Chest and Dark Room, up to a whooping additional 14 floors! They use pre-existing graphics and the same layout.

A similar feature like this was added in Afterbirth+, allowing you to continue the game multiple times after beating The Lamb.

A few unused item pools exist, some of which have existed since Rebirth. Despite being unused, these item pools have been updated in each DLC. All existing pools can be enabled in Afterbirth and onward by picking up the Chaos item.

An item pool containing... even more bomb related items. Removed in Repentance, and replaced with the "batteryBum" item pool.

An item pool containing Mom-related items. Removed in Repentance, and replaced with the "momsChest" item pool.

The Binding of Isaac: Rebirth has some unused audio found with the help of Afterbirth+ modding tools.

An early outro for the track "Ambush", which plays in miniboss rooms (or in the Boss Rush before Repentance).

An earlier version of the jingle that plays when an Angel Room appears.

Aside from the obvious change in language, the Korean secrets (in-game achievements) use different images for Cat Got Your Tongue and Everything is Terrible 2. Interestingly, Ultra Greed has a beard in the Korean versions of these images, much like in early screenshots.