A game based off the movie of the same name that is Incredibly difficult to complete.

The textures used for this early version of Mr. Incredible.

There's an early costume of Mr. Incredible in his red super suit called PLY3. His suit is darker and he is also fatter than his normal red suit in the final (PLY4). This version of Mr. Incredible was originally used at E3 2004 and earlier versions, as THQ was afraid of spoiling costumes in the film. He is fully functional and playable in the final game by simply replacing one of the PLY names in the in.ini folder with PLY3. His model/textures seem to show he was made quite early on.

Mr. Incredible has a costume of him in his office suit listed as PLYA. This suit was likely made later in development as all of the other Mr. Incredible costumes are listed in-between PLY0-PLY4, and it comes before Violet who is PLYB. Unlike PLY3, this model/texture is missing a lot of animations and therefore he is unfinished, so inserting PLYA into the in.ini file (like any other invalid value) would instead have you play as Young Mr. Incredible (PLY0). Interestingly, he has some animations which none of the other Mr. Incredibles have, such as a typing animation, a phone animation, a stamp animation and a pencil animation, which means that these animations would have most likely been used in a cutscene. This Mr. Incredible suggests that a level based in Mr. Incredible's office was planned relatively late in development and then removed due to either time constraints or the fact that they couldn't come up with a decent level based in his office. 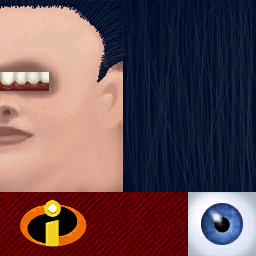 Within PLYB.hip, a file called violet_super_new.RW3.RWTX shows an unused texture for Violet, which is somewhat reminiscent to the below-mentioned PLY3. 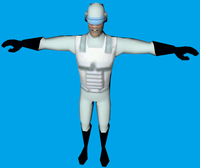 This hench_NI_club_bind.dff.modl model was never used in the final or early versions of the game. 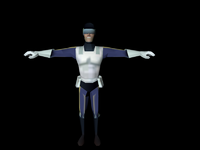 This hench_NI_armor_club_bind.dff.modl was from the E3 version but left unused in the final version.

These two textureless models are pipes that were likely going to be used for some part after Apartment Inferno where Mr. Incredible would have traversed through more buildings.

One of the non functional floating balls.

There are two non functional floating ball objects at the rocket silo apart from the two used ones near the first and second checkpoint.

This coughing animation for a thin man was going to be used in the Apartment Inferno levels.

A coughing animation for a fat woman that was also supposed to be used in the Apartment Inferno levels.

The Civilian Woman Fat has a 5th coughing animation where she bends down while coughing.

The Civilian Woman Thin has never coughed in late for school and stays in a t-pose in the final game.

An unused idle animation for Elastigirl can be found in both PLY5 and PLY6.

A phone animation that was going to be used for PLYA. This can be loaded by replacing the death animation.

Mirage has two unused voice clips in “Beach Landing”. The first clip would have been used at the very beginning of the level as it warns you of danger. The second clip could have been used anywhere although it would have likely been used early on in the level as the helibots appear near the beginning of the level. The voice clip warns you about the helibots. This was found in NJ01_US.HIP where there are two sound files called MGNJ01_002.WAV.snds and MGNJ01_008.WAV.snds.

"You may encounter some of the bots that are protecting the island."

"The Helibot is the flying bot armed with explosive rounds. A flying version of the Bounder bot. Its high advantage gives it amazing accuracy."

The Arsonist has two unused voices inside LD01_US.HIP.

"Who do you think you are?"

This music is found within the files for "Great Falls". Its exact purpose is unknown.

The Windows executable has lots of hard-coded game parameters which names are still present. For example, the laser attack has these parameters (among others):

There are also some boolean hard-coded parameters used during development that alters how the game acts when changed. For example:

There was some kind of debugging HUD for the Violet gameplay that printed the following information:

However, after the string and the parameters are loaded, an empty function is called and they are ignored.

There's a file called Line1 which was never used in the final game. The file can be found in LD01_US.hip.

In many files of the game, there is a text file called Text_String_01 or String_Next_Level which were never used in the final game.

Many of the text files would say

This text was likely a leftover from a debug feature that would have been used in the game's development. The button commands stated are from the PS2 version, although these text files appear in the other versions.

All the game levels can be unlocked to be accessed with the level selector using the cheat code ILIEMIAOW.

In some of the level video thumbnails, there seems to be an early combo meter that was cut from the final game. In the video thumbnail it only shows either 0000 or good (much like in the final), and its animations and functionality look very close to the combo meter from Rayman 3. The combo meter is below the health bar, rather than at the top center of the screen like the final game, and has words ranging from good to showtime which appear in yellow rather than white. 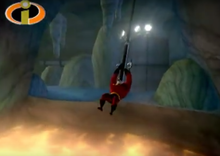 As well as the unused costumes for Mr. Incredible suggesting unused levels, there are mentions of two test levels within the in.ini files PG?? and TS??. Every other level has a 2 digit code after it as well as some numbers which can be seen by scrolling down the in.ini file (e.g. "Bank Heist" is OM01,184,94) But these two levels lack that. Few assets of these levels still exist so they cannot be mapped. According to the in.ini file found in the PlayStation 2 demo version of the game, these two stages were a Playground and a Test Level respectively. Both of these levels are listed under PLY3 as the playable character.

Rocket Silo contains a mysterious room which can only be accessed via moon jumping. Despite being closer to the end of the level, it's only loaded during the first section of the level, so reaching the second checkpoint (which loads the next few areas) will unload this room. The room is similar to the first room of the level except that there's no holograms saying the name of the rooms. The collision detection of the room is also very unfinished, as many parts of the floor and the walls have no collision detection. This could be a leftover from "Secret Lava Labs" or an earlier version of the stage.

The final game has some unused splash screens from a previous demo version. 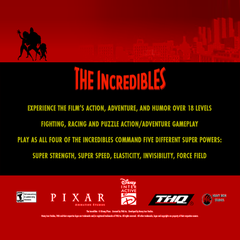 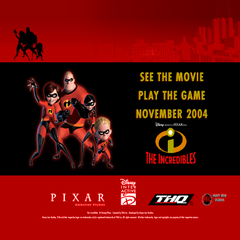 Here's an unused bus icon from late for school which used to be on the Dash meter in earlier versions of the game. The icon can be seen in early screenshots. 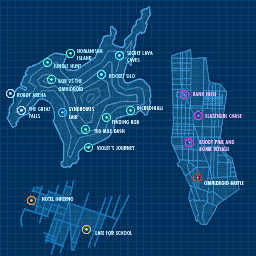 This map is used in the level select screen however, the map is extremely zoomed in and you never get to see the whole map. The full map shows many early names for stages which mostly cannot be seen usually in-game due to how zoomed in the map is. Levels not mentioned in the table below have the same name in-game and on the map.

There's several videos in mnui.HIP and MNUS.HOP. In mnui.HIP is the game's trailer with a time counter and a watermark with the text "WIP" (Work In Progress).

In MNUS.HOP is the movie trailer.

Also in MNUS.HOP is a video about the development of the game.

There are lots of text strings from previous SpongeBob games by Heavy Iron Studios inside the Windows executable. Here are some examples:

The Windows game executable has some uncompiled D3DX9 shader assembly functions inside the executable. Here is an example:

There's also a lot of hexadecimal code in text format inside the executable.