The Legend of Zelda: Ocarina of Time/Early Rooms

In order to conserve memory, some parts of rooms remain incompletely loaded until either the player approaches them or enters the area. A low-poly or "incomplete" version copy of the room-to-be is placed in the room the player is currently in to maintain the illusion. Sometimes, the copies of the rooms differ from the room as seen when the player is actually in them. It is assumed that the actual rooms were modified after the copies were created, and the developers forgot to modify those to match.

Below room 10 (with the platform that can be knocked down with the Megaton Hammer) is a slightly older copy of the room where you meet Darunia (Room 02). The only difference this room has is the door frame, which sticks out more in the early version. This same frame appears on the boss map.

A door was removed inside the chimney on the right side of the Fire Temple (Room 06). You can see this from room 08, near the chest with 200 Rupees. The same door can be seen to exist in the late 1997 overdump's early version of the Fire Temple, where the outer room made a full circle around the inner chimney.

The door would have been located in the place marked in the image. 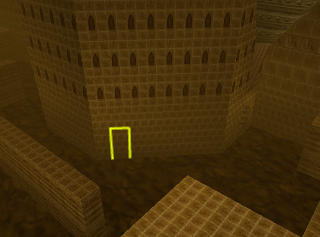 Visible from the room with the dragon statue. The dead-end in the side of the room was made much smaller and what seems to be the whirlpool has a different design.

The earlier version is missing a side wall and appears to lead to a dead-end, in contrast with the final version, which expands into additional areas.

In the Spirit Temple, the room with the giant statue (Room 05) is visible from the room above (Room 25).

There are several differences between the preview version of the room and the normal version: 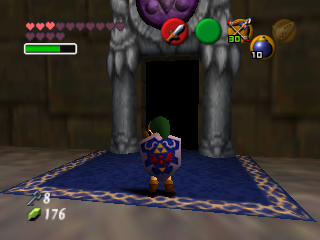 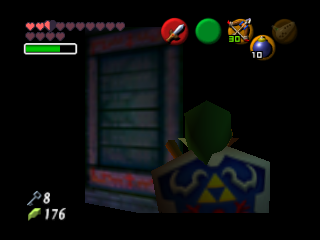 Near the end of the game, while escaping the collapsing Ganon's Castle, you cross a short bridge with a single ReDead on it in the castle's next-to-last room. As the room is a modified version of the one which contained the barrier protecting Ganon's Tower, you'll be able to see the doorways leading to the castle's mini-temples in the distance, but missing the actual doors. However, if you let Zelda open the gate to the final hallway and then manage to leave it without letting the game reload the previous one (for example, by means of the Debug ROM's free-movement mode), you'll find the missing doors floating in the void.

The positions of these non-interactive doors match up perfectly with the door frames in the previous room, making it likely to have been a goof by one of the map designers. 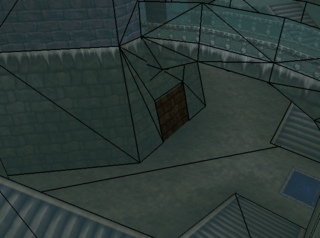 This entrance, found in the central area where the castle is crumbling, was removed from the game for unknown reasons. Only the collision model shows it.

The castle exit is different in the "collapsing castle" version. There is a huge entry into a simple door.

The collision area contains many differences. There are no doors, and the ceiling decoration is very different from the final version.

Because boss rooms are located in their own scene, mockup rooms were made for them and can be briefly seen as the boss door is opened.

The mist in the early version is denser compared to the final room.

The UV mapping on the ground textures is slightly different in the early room and the platforms in the corners are missing.

The platforms in the middle were made slightly larger and the ladders twice as wide. 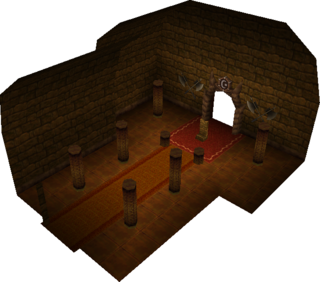 Between the throne are two small pillars that are unused in the final version of the room.

These pillars are still visible in late trailer footage, so they seem to have been a last decision cut from the room.

The pre-boss room contains a few different things from the final version. The textures used for the water and the wood around the door are different.

The design of this room seems to be similar to the Deku Tree's, where the player would start in a short hallway, and a door would close behind them upon entering the main area. In the final version, the fight just starts immediately. At the back end of the hallway is a sliding wooden door, but it is not level with the floor. Just behind this is an exit that puts you in the middle of the dungeon, suggesting that the level design was significantly altered.

It is similar to room #4, after the midboss.

Interestingly, this room's layout matches up perfectly with one of the unused scenes! That scene features electric sponges in the pre-boss room, which combined with this layout would have been the way for Link to reach the boss room in this version of the dungeon.

The color of the carpeting was changed from red to blue and the elevator looks to be standing on a small platform. The detail of the walls of the hallway leading to the boss room more closely matches the late 1997 overdump's Forest Temple than the release version. 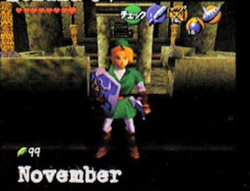 The elevator is textured in the same way as the one in this early screenshot of Forest Temple.

This layout is simpler than the one in the final game, featuring just a bunch of blocks you have to jump across to get to the boss door. This mechanic, which required dropping two of the blocks from the room above rather than a single pillar, was present and fully implemented in the late 1997 overdump version of the Fire Temple. 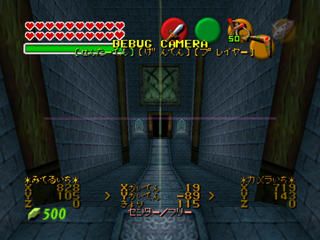 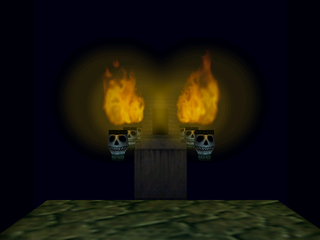 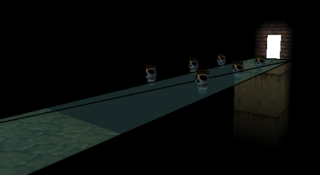 There are two lines of skull torches down the path towards the entrance of the opposing room, which make for a pretty scary pre-boss room. There exists collision between the torches indicating that there would have been an invisible bridge there.

While there is an exit index that places you on the other side of the boss door in the Shadow Temple, the boss room uses a different exit index, which results in a crash.