A simple way to enable the debug mode is to use the Action Replay code below:

In both the US and Japanese versions of The Wind Waker, when the Debug Mode is activated, bars of different colors are displayed at the bottom of the screen. While their exact purpose isn't known, they seem to indicate CPU and GPU usage. In the US version, however, the text output on the right side of the screen was removed, while the European version, which was the last incarnation of the game to be released, lacks these bars entirely.

The game also features a debug console that displays various information, such as the amount of memory being used and the internal name of the room in which Link is currently standing. To activate the console, press Z on Controller 3. The console window itself can be moved around the screen by holding down L + R + X + Y and moving the control stick. 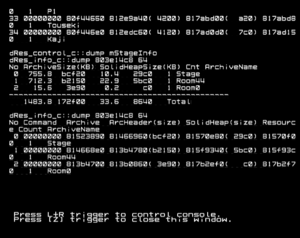 Like Ocarina of Time and Majora's Mask, The Wind Waker also has a crash debug screen. The button combination to show the debugger is as follows:

The file client_ud.bin in the US version is a debugging version of the normal Tingle Tuner data that runs on a Game Boy Advance. It features the ability to view all the text within the client, but not much else. Text that is meant to start events in the game itself doesn't have any effect when displayed. There are also versions of this debug client for all the languages in the PAL version.