The Punisher is a beat-em-up starring the titular anti-hero vigilante from the comics by Marvel. This was Capcom's first game with licensed characters from Marvel, and the only one to not be a fighting game, unlike the rest of the Marvel-based arcade titles that would come after this one.

Use the following MAME cheat to start a cut second bonus stage that takes place inside of a plane, an area that's otherwise entirely unused. 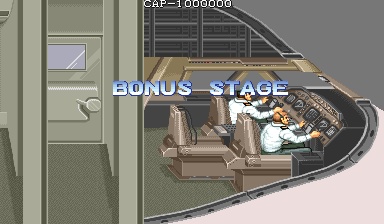 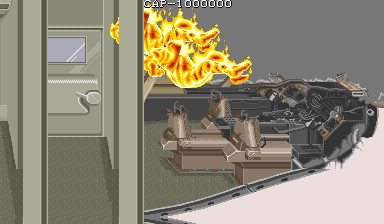 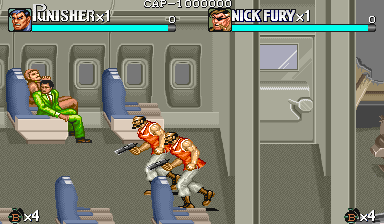 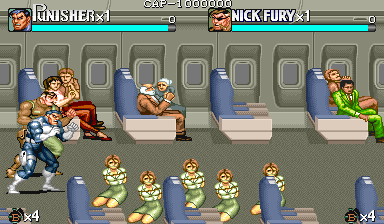 The stage begins with a sequence where the cockpit explodes and the plane's pilots are engulfed in fire, with two gun-wielding enemies getting in and walking past some distressed passengers, several bound-and-gagged stewardesses, and Punisher and/or Nick Fury. 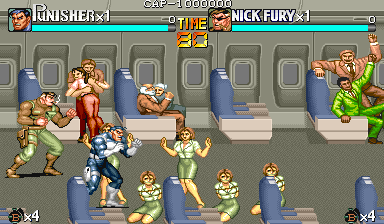 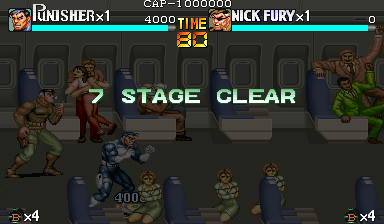 Soon after those enemies walk off-screen and the sequence ends, the stage is already "completed". If the players are quick enough, they can optionally free the tied-up women for food drops (it's not possible to take damage here). As seen in the following Stage Clear screen, the game thinks Stage 7 has been beaten (there are only 6 stages in this game, excluding the used bonus level) and as a result, the game proceeds to play the special one-credit clear variation of the staff roll.

In what part of the game this bonus stage was intended to be and what its actual objective was is unknown.

An icon for an odd face-thing is located amongst the HUD portraits for the game's characters, it has an unknown symbol on the top left.

Located in the ROM amongst Nick Fury's characters sprites are "in-game" graphics for the afore-mentioned face that has a character icon seen above, it has rotating frames.

As seen in a screenshot on one of the game's flyers, these kids were originally in the background seats of the hijacked school bus where the boss fight of Stage 1 takes place, but they got removed and only the bus driver stayed.

Alongside the "Help me!" speech bubble used for the jailed women in Stage 2, there are these "Argh!" and "Oops!" speech bubbles. Their purpose is unknown.