Trojan is a post-apocalyptic action game about the world's finest wooden horse condoms.

Like Section Z, Trojan has some graphical leftovers from Commando.

The health meter graphics from Section Z were left in the ROM as well.

Track 36 is unused. That's why it's under the Unused Music section. 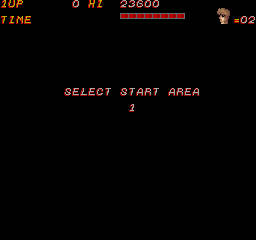 In the first U.S. version of the game (the one not licensed by Romstar), there's a level select menu at the start of the game.

This isn't present in any other version: Instead, there are three dip switches that control which stage the player starts on.