From the original creators of the series and PlayStation's longest running, Twisted Metal (also known as Twisted Metal PS3 or TM 2012) comes racing in with the insane, high speed action and psychotic serial killer clown the series is know for. While it differs from the rest of the series in amount of character stories, maps and return of classic vehicles, this entry still comes packing with new modes, weapons, sidearms and a custom paint skin feature to make taking on the competition either a Twisted Metal veteran's nostalgia spree or a mental escapee's dark fantasy come to life.

Unlike most games, some of the unused content actually has been openly shared by the dev team across multiple webs sites.

In this mode, one team had a nuke loaded semi Truck they would try to deliver to Los Vegas (Hence the name) while the other team would try to stop the semi from reaching the the en. Co-creator and director, David Jaffe, said it was cut due to time constraints. Gameplay of RtV starts at the 2:34 mark.

Veteran vehicles were intended to make a make a return as downloadable content, but for some unknown reason, they along with dlc as a whole for the game never happened. The models for them still got made and can be viewed. As of now, it's unknown if they exist or if even any code hints that they are in the game's files.

It is unknown what the stats of these vehicles would have been or if they would be like past games in the series. Similar thing applies for their special, and seeing as every vehicle in the game each has two, what new ones those would have been. 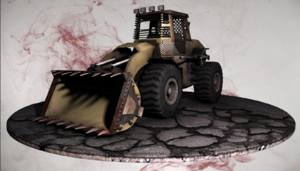 Different endings for each character were planed depending on what difficulty the player completed on. They, along with completely different cut scenes, were removed from the game. They can be watched bellow.