BattleBlock Theater is a game where you get captured and have to escape prison- I mean the theater. It's pretty goofy and doesn't take itself seriously sometimes, but it is addicting and gives you lots of replay value with the level creator. 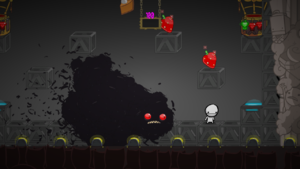 This hideous monster can be accessed using via the use of hacking and it reserves the block ID of CC. The only way for it to take damage is when a fireball hits it. Once defeated, the level immediately ends regardless of the gamemode.

There are icons for the doors that go unused.

A good amount of animations exist in the game's files that are not only for the players, but for the enemies as well.

Some animations of interest include:

There are a variety of Comic-Con levels left over in the Xbox 360 version's files, and they can be accessed using hex editing. They are minor edits of levels found in early chapters of the game.

The Steam release slightly changes the prison cell room's appearance (mainly, the prompt to press Y). Also, the Xbox 360 release has noticeably darker graphics than the Steam release does.