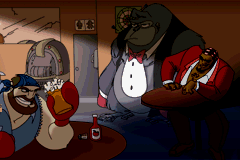 The background for O'Reilly's can normally be scrolled at most to see half of Killa Gorilla by highlighting Rocco McScrub, but the background does actually extend a bit further, revealing Don sitting right beside him. 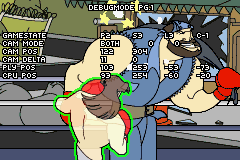 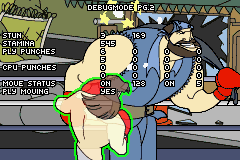 Pause the game during a match, then press L, R, Select. The pause screen will change into a Debug Mode, which displays information about the game's current state, the status of the player and CPU characters, their position in the playfield, and attack and damage statistics. Additional info for the camera's current mode and location is also displayed. Press L or R to flip between both screens.

Pressing Select and unpausing the game ends the current round.

Press A at any time in either screen to lose the match after unpausing the game.