Mike Tyson's Punch-Out!! is the NES port/semi-sequel of the arcade game Punch-Out!!. It features Mario as the referee, boxers that are obviously cheaters, and an out-of-place ad for the Nintendo Fun Club (later known as Nintendo Power).

The version that plays in-game has sound effects that replace four notes from the song. This is the underlying song without any sound effects.

The first note of the main melody does not play in-game for some unknown reason.

The "Oof" DMC sample from Kung Fu and Zelda II: The Adventure of Link appears in the sound effects amongst the laugh sound effects.

Present at 0x1A1BB. This signature is loaded into RAM at 0x160 to check for a cold boot.

The original "genteiban" (limited edition) Japanese release, housed in a gold-painted cartridge and given away only as a consolation prize for second-place winners in a Family Computer Golf competition, is essentially a modified prototype. The game data includes Tyson's graphics and coding, but he isn't accessible, with the last fight instead being against Super Macho Man (who had previously been the final opponent in Super Punch-Out!! for the arcade). In fact, all graphical tiles are identical between the LE and the Tyson version, as they share the same character (CHR) ROM, with the only visual differences being palette changes, as described below.

When the game was released to the public as Mike Tyson's Punch-Out!! it had various changes, such as Tyson becoming accessible as the new iconic last boss.

The original version was eventually released to the public on April 10, 2019 as part of the Nintendo Switch's online service of Famicom titles.

The title screen had blue "MIKE TYSON'S" text added at the top.

More Engrish fixing. A dashed line had to be removed to fit Tyson's name.

In the Tyson and Mr. Dream versions, there is a password to view the credits (106 113 0120, then hold Select and press A + B). In the original release, this password was left unfinished: the ROM contains all six secret passwords and has the routines to check it with the same button codes, but they are never called from the password check routine and there is no code to handle these after checking, as well as the credits display code. The credits text is present in the ROM in the same place as in all subsequent releases, but obviously rendered unused. The credit messages differ slightly, with U.Kaneoka and U.Kuriyama being changed to Y.Kaneoka and Y.Kuriyama in the other versions.

The password to access the "Another World Circuit" mode (135 792 4680, then hold Select and press A + B) is also inaccessible. In this mode you fight 8 boxers in a row and the title bout is against Tyson and not Super Macho Man.

The HUD and boxing rings have a different color palette than the ones in the Tyson and Dream versions.

The short demo is a bit different between versions and has yet another color palette not seen in-game.

Piston Honda and King Hippo's skin colors were changed from pinkish to yellow, as was Glass Joe's hair.

The color palette on the profile images of Honda and Hippo was updated as well.

Bald Bull has purple-colored shorts and boots in the Major Circuit, and blue ones in the World Circuit. In subsequent versions, he always wears light blue.

Even more Engrish fixing was done to the regular victory screen, and unnecessary quotes were added. The original Japanese version is quite confused on who it should be congratulating.

The newspaper at the end of the game was changed to tell the player how to fight Mike Tyson/Mr. Dream, added a password for the Super Macho Man match, had its Engrish fixed, and changed the exclamation mark to be more blocky.

You guessed it, more Engrish and second-person fixing.

Most (perhaps all?) of the music was altered after the Limited Edition. With one exception (see below), the actual melodies and instruments remained the same, but there is more vibrato in the LE version's BGM.

For example, here's the main theme.

The "Title Bout" theme was totally changed after the LE version. 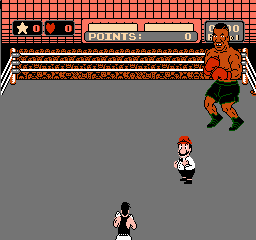 Mike Tyson is programmed in the game, and is functional as an opponent.

If you use Game Genie codes IESZPAAA + AKSZZAAA, Mike Tyson will replace Glass Joe. Game Genie code AANXPPZL will present the fight as The Dream Fight against Kid Dynamite.

The background color of the ring is gray (value 00), which suggests that the proper palette color may be missing. 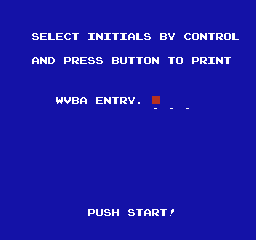 Among the games available on Nintendo's PlayChoice-10 arcade hardware was Mike Tyson's Punch-Out!!, which had a few differences from the retail version.

When Nintendo's license to use Mike Tyson's name and likeness expired, a new version of the game was released that replaced him with a generic character named Mr. Dream. While this version is pretty rare on cartridge compared to the Tyson version, Animal Crossing and all digital re-releases use this iteration (aside from, as noted above, Nintendo Switch Online's Famicom game library, which instead has the Limited Edition).

Incidentally, the game's inclusion in Doubutsu no Mori + was the first time the Mr. Dream version was officially released in Japan, as physical cartridges were only put out in North America and Europe.

The updated version removes "MIKE TYSON'S" from the title screen, as well as the "MIKE IS WAITING FOR YOUR CHALLENGE!!" screen. A 1990 copyright was added.

In with the Dream, out with the Mike.

And here's Mr. Dream himself. He's basically just a palette and head swap of Tyson, although at the same time based on former undefeated record-holder Rocky Marciano.

The pre-fight stats were changed for Mr. Dream, making them less realistic and more mysterious.

The "Another World Circuit" version of Mike Tyson is glitched, causing his name to be displayed as "Another mchampionn", due to writing the words "Another Champion" on top of "Mike Tyson". The glitch is fixed in the Mr. Dream version of the game, showing his name as intended. 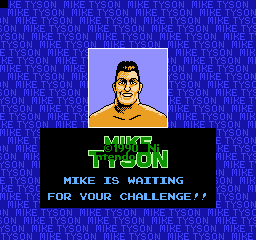 Piston Honda's quote of "Where is the NHK TV camera? Hello Tokyo!" was changed in the Virtual Console versions to "Where is my camera crew? Hello Tokyo!" This is likely because NHK is an actual broadcasting company in Japan.