Zombies are the least of your worries: Vampires, mermen, blobs, chainsaw-wielding crazies, and yes, spiders, are some of the more terrifying creatures that will also try to off your neighbors. 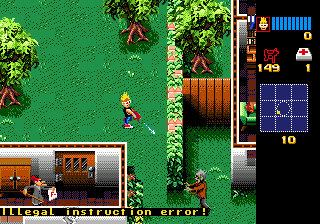 Exclusive to this version of the game is a basic error handler. Handy! Use the Game Genie code ABTA-B92C to trigger a 68000 Error in the demo.

The complete list of error traps starts at 2D60 in the ROM.

This string is located at 0x279CA in the US version, 0x2799E in the European version.

A few items and one weapon are unused, though unfortunately there's nothing unique about them besides their graphics. The Game Genie codes replace Player 1's starting weapon.

The banana is functionally identical to the popsicle weapon, and uses the same graphics. In the Sega Genesis version, only the item's pick-up item remain. The SNES version contains graphics for the actual weapon and its HUD icon, but they were cleaned out of this version.

This is identical to the random potion. It's missing the question mark on the flask, but that's about it.

Items 5C and 66 point to the functionless Grey Potion and Machine respectively, at least in the SNES version. In the Genesis game, they don't even have any graphics in the ROM. So in this version, they're just blank entries with no icons and no purpose. Exciting!

This text appears in the ROM at address 987B:

While partially coded in, this bonus was never finished. It would grant 1000 points when a certain number of Blob monsters are destroyed. The Blob monsters can only be destroyed with cold weapons.

The following passwords are treated as valid, and will start the player in the bonus stage "Curse of the Pharaoes". Once the bonus is complete, the game will display the message "Dr Tongue welcomes you to 55 levels of terror" before hanging. The first code gives you all ten victims, with each subsequent code removing one victim from the total.

Zombies Ate My Neighbors contains one unused music track. Interestingly, it's actually different from the SNES' unused track, and takes up a different slot! It's track 01, which points to nothing in the SNES version.

The Chainsaw Maniac enemy was redesigned into an equally insane Canadian lumberjack in the European version. Surprisingly, it made the transition rather well, behaving identically in both versions. Some related sound effects and text (such as stage names and a bonus related to it) were modified accordingly. (e.g. the "Chainsaw Begone Bonus" became "Axeman Begone Bonus".) This may have been done to prevent comparisons with Leatherface from The Texas Chain Saw Massacre, which was banned in England, West Germany, and other European countries.