This article brought to you by Chupa Chups®! 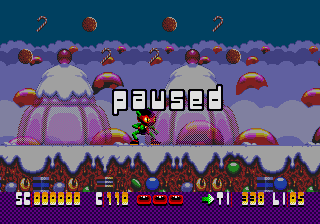 Enter Game Genie code AK0T-CA84 (US) or AK0A-CA3J (EU). Pause during gameplay, and the left two digits of the collected item (?) counter will change, denoting the world (left digit) and level (right digit) to go to. Toggle the world number with Up and Down and the level number with Left and Right. To go to the chosen level, press A+B+C to return to the title screen, then start the game.

It may also be necessary to enter the Game Genie code REDT-C6X2 (US) or RH9T-860T (EU), in order to prevent the game from hanging/freezing at the Sega logo screen.

An alternate version of the World 4 theme can be found within the game's music data (at sound code 74). This version, "Rock'N'Zool," is actually the correct version of the theme heard in the original Amiga version. The version used in this port, as well as most others, is actually a remix ("Space Ninja") from another game published by Gremlin Graphics, Lotus III: The Ultimate Challenge.

The HUD in the European version is at the very bottom of the screen, providing 16 more pixels of vertical screen space for the game.