Arcus Spirits is the Super Famicom port of Arcus Odyssey for the Sega Genesis and Sharp X68000. A North American release was planned, but canceled after Wolf Team's American publisher was bought out by Sega. However, a nearly-complete prototype of the American version of the game has been dumped.

The original Odyssey name is included with the title screen graphics. 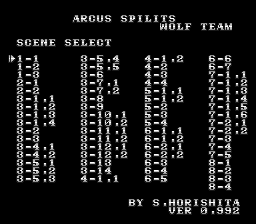 Arcus Spirits contains code for a stage select menu, but it is unreachable in both the JP and US versions of the game. To access it, start the game with the following Pro Action Replay (PAR) codes enabled:

The menu will appear after selecting a character.

This text appears at the very beginning of the Japanese ROM:

The message was moved to offset 0x42 in the US prototype and padded with two extra blank lines.